The Pride of Wildcat Land

Since its humble beginnings in 1887, Professor Alexander Brown organized fifteen student-musicians into the first band at was then known as Kansas State Agricultural College.  The K-State Marching Band, now known to Wildcat fans as the "Pride of the Wildcat Land," has come a great distance in many, many ways.

The K-State Marching Band made its first appearance with an athletic team in 1898 when it escorted the college's baseball team to a game. Having now grown to over 300 members, the K-State band represents our university, the city and community of Manhattan, and the state of Kansas each year at home and across the country at home games, NFL exhibitions, bowl games, parades and festivals, and countless alumni, charity, and community events.

The K-State Band has become an integral part of its community and has a rich history of recognition and support at every level: public school directors and students, the K-State student body, faculty, coaches, Athletic Department, and president, local and state government.

The "Pride" has been invited to many out-of-town venues, appearing before huge audiences, both live and on television. Occasionally the band travels to perform at a Kansas City Chiefs' home game. They have also performed on three occasions at Texas Stadium for Dallas Cowboys home games and twice at Denver Broncos home games. The K-State band performed at the 1974 NFL Pro Bowl and in the 1977 Texas State Fair. In more recent years, the "Pride of Wildcat Land" has accompanied the K-State football team to eleven consecutive bowl appearances. This past year the "Pride" traveled to Arizona with the team for the 2013 Fiesta Bowl!

For decades, a memorable performance each year has been K-State Band Day. Now attracting approximately 2000 high school and middle school students converging each year on Manhattan, the day-long event includes a morning parade through the center of town and a massed band performance at half time of that afternoon's home football game at Bill Snyder Family Stadium. On September 15, 1984 the K-State Band Day was recognized in the Guinness Book of World Records. In conjunction with that year's Band Day, sixty-seven school bands joined the K-State Band on the field, creating a 3,144 piece marching band, which put them in the book as the world's largest marching band!

The "Pride" has been recognized by many local and national media, including: The Manhattan Mercury, The Kansas State University Collegian, The Topeka Capital Journal, Purple Pride, The Union Tribune, The K-Stater, and The Lawrence Journal Tribune.

Most recently, the Pride was the recipient of the 2015 Sudler Trophy. This is the most prestigious award in college marching band and recognizes excellence and innovation in marching band. The Sudler Trophy is awarded to only one college band every two years.

In 2016 the Wabash Cannonball was recognized by ESPN as the greatest pre-game tradition in the Big 12.

Membership in the "Pride of Wildcat Land" is open to all K-State students, regardless of major, with some members receiving scholarship aid. Band members come from schools throughout the state and from across the nations with diverse educational goals and backgrounds. Students representing every college on campus, and nearly every curriculum, work many hours a week in rehearsal during the marching season.

The Songs of Kansas State University

Wildcat Victory is the official fight song of Kansas State University. It was originally written, verse and chorus, by music department student Harry Erickson in 1927. Over time it became known to K-State fans with the chorus section on its own. The band presents Wildcat Victory in various forms throughout athletic events, from a short excerpt of the introduction to a full version, complete with singing.

The KSU Alma Mater was was officially selected as the result of a campus-wide competition in 1888. The original work, composed by H.W. Jones ('88), was four stanzas long, including the chorus. Following a school name change, the song was altered by removing the letters KSAC (Kansas State Agricultural College), replacing them with KSU. The length of the piece was also shortened to two stanzas.

Wildcat March: In October, 1928, John Philip Sousa was to make an appearance at K-State. A petition, signed by most of the student body, was presented to Sousa on October 10, 1928 requesting that he compose a Kansas State Agricultural College march. The piano arrangement of Kansas Wildcat March arrived at the Music Department in the spring of 1931 and is now an integral part of the pre-game show at every football game.  Wildcat March is normally one of the selections you will hear the "Pride" playing in each of the parades they march in every year.

The Wabash Cannonball: With a history like no other, and a firm grasp on tradition, the Wabash Cannonball may be known as a second fight song to the K-State contingent. Composed in 1933 as a folk ballad saluting the nation's rail-riding hobos, Wabash Cannonball was first performed for an athletic event at K-State on December 16, 1968. Wabash was the only selection in the band's repertoire that evening for a home basketball game at Ahearn Fieldhouse. Just three nights prior, arsonists had set fire to Nichols Hall, at that time the home of the Music Department, destroying all of the departments assets including the sheet music. The band director at that time, Phil Hewett, the band director at the time, just happened to have taken one copy of Wabash home from the library that night to work on the arrangement; thus making it the only selection to survive the fire. Since then the Wabash Cannonball has come to represent the survival of the underdog in the hearts and minds of all true K-State fans, and has earned a secure place in the KSUMB's history and traditions.

Nickname: At the turn of the century, K-Staters were commonly referred to as the "Aggies," which became their favorite label. The nickname "Wildcats" was given to the football team in 1915 by then head coach Chief Bender because of the squads "fighting spirit." The nickname was changed to the "Farmers" in 1916, but head coach Charled Bachman switched it back to the "Wildcats" in 1920.

School Colors: The school color, Royal Purple, was adopted in the fall of 1896 by a committee made up of Miss Minnie L. Copeland, Miss Winnifred Houghton, and Miss Ina Holyrod, of that year's senior class. Although K-State's only official color is purple, white has been used as a complimentary color for many years. Silver is also a common second or third color. The phrase "Purple Pride," which is often used in association with K-State athletics, was given rise during the tenure of football coach Vince Gibson.

School Mascot: Willie the Wildcat, a student bedecked in a large, life-like wildcat head, is Kansas State's number one fan. The mascot is a central part of athletic events, but Willie also attends other functions around the state as an ambassador of K-State and Manhattan. Students audition yearly for the honor of representing K-State as Willie the Wildcat. Traditionally, the identity of the student portraying Willie is kept secret. A grayish bobcat (wildcat), named Touchdown XI donated by the Clifford Roy family of Smith Center, resides in Manhattan's Sunset Zoo. The tradition of Touchdown began in 1922 when head coach Charles Bachman helped introduce the first mascot to the campus. Once a regular at Wildcat contests, Touchdown mascots no longer attend the games. 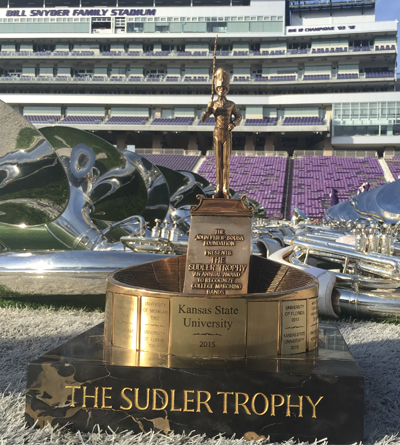