Eye Movements and Memory for Objects in Scenes 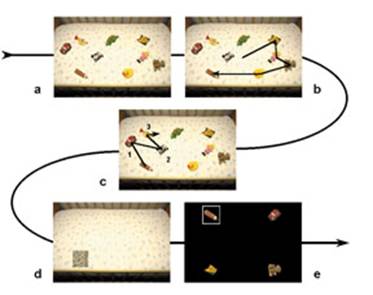 As we move our eyes from object to object in a scene, what information do we retain from each object we look at? And what effect does the order in which we looked at those objects have on our memory of them? Research on change blindness (when changes made to real world or pictorial scenes are not noticed, even when a person is looking at the scene) has suggested that people remember little of what they see in scenes—otherwise they would surely notice the change! However, our research in collaboration with Gregory Zelinsky of SUNY Stony Brook (Zelinsky & Loschky, 2005) has shown that memory for an object in a scene can last over several intervening fixations on other objects in the scene, suggesting that memory is better than previously suggested in change blindness studies. Nevertheless, our research has also shown that memory for an object rapidly decreases as a person fixates on the first two to three subsequent objects. This recency effect is based on fixation sequence, not simply the decay of memory over time. Thus, the change blindness phenomenon may in part be explained by this gradual loss of memory as one looks from object to object in a scene. However, refixating on a object can serve as a memory rehearsal and help maintain object information; this is believed to improve memory for a target object, make it more likely that the object will be correctly identified later, and counteract the interference caused by looking at other objects (Zelinsky, Loschky, & Dicksinson, 2011). We propose that a prominent theory for explaining memory for objects in scenes, Object File Theory, must be modified to take into account the rich body of theory and research in the classic memory literature. This research should also be applicable to areas in which it is important to know what information a person attends to and remembers during task performance - for example, information displays in airplane cockpits, air traffic control, driving simulators, etc.

Varakin, D.A. & Loschky, L.C. (2009, May). Object appearance is not integrated with scene viewpoint in long-term memory.  Poster presented at the 9th Annual Meeting of the Vision Sciences Society, Naples, FL.

Varakin, D.A. & Loschky, L.C. (2009, April). From where did I see that?  Talk presented at the Annual Meeting of the Midwestern Psychological Association, Chicago, IL.