The Effects on Perception and Performance When Image Resolution Drops 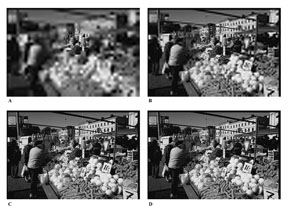 What happens to perception and performance when image filtering goes beyond the limits of visual resolution and removes otherwise perceptible information? By creating image blur in this way, we can affect where viewers look in scenes.

Our studies have shown that only moderately detectable image blur appears to have little or no effect on perception and task performance. However, there is a blur threshold, beyond which eye movements are affected and a sort of 'tunnel vision' is created — which should be avoided in most gaze-contingent multi-resolutional display applications. On the other hand, this blur threshold for affecting eye movements could be used to focus attention on particular image areas in the same way that depth of field is used in photography and cinema to focus attention on an object of interest.