People are faced with numerous distractions every day in their lives, and multi-tasking has become the new way of getting things done. However, this may not be a good thing - complex environments require much of our attention and we only have limited resources for processing information. By attempting to focus on more than one task at a time, performance across all tasks often decreases. This is especially apparent when studying the useful field of view (UFOV). The UFOV contains everything that a person can see in their visual field in one eye fixation, without moving their eyes. However, the extent of the UFOV is not fixed, but can change - training can expand the UFOV (Ball et al., 1988), while adding a cognitive load can diminish it.

Introducing a cognitive load, usually in the form of a demanding secondary task that requires working memory resources, can make people overlook events or objects within their UFOV, or even glance directly at something but not remember seeing it. This can happen in a variety of situations; a conspicuous example is a person driving while distracted by a cell-phone, not noticing a bicyclist on the side of the road. After first finding a reliable way to measure the UFOV, training could then be implemented to teach people to function under the stress of a cognitive load and protect their UFOV against deterioration. This would be especially useful for drivers or pilots.

This research project, funded by the Office of Naval Research (ONR), is focused on developing a new measure of moment-to-moment changes to the UFOV due to stress, fatigue, and cognitive load, which can be used in dynamic viewing environments such as simulators and virtual reality.  A key idea is to use gaze-contingent displays (GCDs), which use eyetracking to change a computerized display depending on where the viewer is looking at any given moment. We call this the gaze-contingent useful field of view (GC-UFOV) measure. 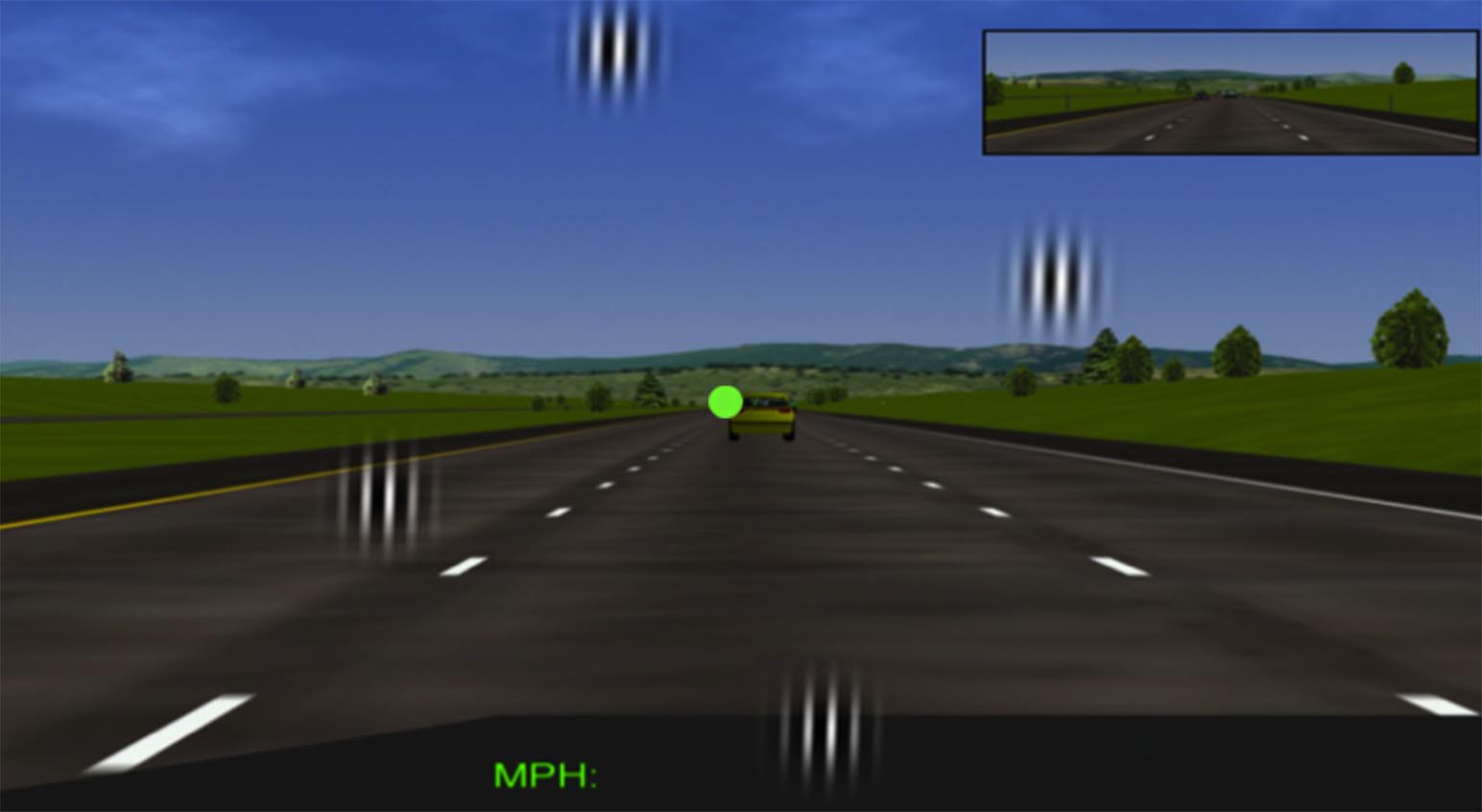 Our more recent studies (e.g., Ringer, Throneburg, Johnson, Kramer & Loschky, 2016), conducted both in the KSU Visual Cognition Lab using our gaze-contingent displays on standard computer monitors and at the Beckman Institute using a driving simulator, have employed a different dependent variable to measure the field of view, namely Gabor patch orientation discrimination.  Gabor patches are the four black and white, slightly off-vertical Gabor patches shown in the picture above. Click on the video below to see an example of the Gabor discrimination task used in the KSU Visual Cognition Lab, and click here for a video that shows the Gabor discrimination task in the driving simulator.  We made this change because, while blur may be detected pre-attentively, Gabor orientation discrimination is known to be affected by attention and also because discrimination tasks tend to show stronger effects of attention than detection tasks.  These studies have also used GCDs to ensure that the Gabor patches appeared at varying retinal eccentricities, depending on where the participant was looking, and scaled the difficulty of the Gabor discrimination task at each distance from the center of vision to make them equally difficult when people are fully attending to them. By doing that, we can separate the "hard-wired" effects of distance from the center of vision on visual resolution (based on, for example, the density of photoreceptors across the retina) versus the effects of attention on visual resolution.  In several studies in the KSU Visual Cognition Lab, participants carried out a picture memory task while while carrying out two other tasks: 1) when the Gabor patches appeared, they decided whether the Gabors were vertical or not, and 2) at the same time, participants also performed an auditory N-back task. In several driving simulator studies, participants carried out a driving task in a driving simulator while carrying out the same two other tasks, namely 1) the Gabor patch orientation discrimination task, and  2) the auditory N-back task.

This video illustrates a gaze-contingent Gabor orientation discrimination task in a natural scene, which is being used in current studies. The yellow dot moving around the image represents the subject's eye movements and was not present during the actual experiment.

The results of all of these studies (e.g., Ringer et al., 2016) have shown that performance on the Gabor orientation discrimination task was affected by cognitive load from the N-back task and also the rotated L vs. T task. These results show that our gaze-contingent useful field of view (GC-UFOV) measure is sensitive to various manipulations of attention. We are currently developing various new studies to both refine and utilize our new dynamic measure of transient changes to the useful field of view, the GC-UFOV.