If you have questions or comments, or suggestions, please send an email to 2025@k-state.edu.

by Savannah Sherwood and Theo Stavropoulos

The K-State 2025 Strategic Action Plan calls for "a campus environment that responds to changing needs, embraces diversity, values communication and collaboration, and is respectful, trusting, fair, and collegial for all." Diversity is not only one of the eight "common elements" of these visionary goals, it also represents a value for Kansas State University that is core to its mission and deeply embedded within its Principles of Community. Through expanded partnerships and resources as well as inclusive planning efforts—such as the first ever University Climate Survey, the university has set a course to improve upon its current campus environment in specific and tangible ways, in order to build a K-State family where all are welcomed, included, and supported by the community as a whole.

But, all too often, the forces of intolerance and injustice surface to put communities and collective action to the test. Policies and processes help provide institutional direction and reinforce shared values, but only people can put these values into practice. So what happens when the bonds between family are tested?

In August of 2014, the country and the world were shocked and dismayed by the shooting of Michael Brown in Ferguson, Missouri. As the city of Ferguson, state of Missouri, and the United States worked to respond to this tragedy, roughly five hours away—in Manhattan, Kansas—a university community felt the aftershocks. And, as a result of challenging conversations and concerns that were raised during this period of turmoil, people came together to launch a community-focused response.

Established in 2015, the Cats for Inclusion campaign set out to address issues of racial injustice within the K-State and Manhattan communities. A partnership created between the Black Student Union and Staley School of Leadership Studies, the campaign is a community-wide initiative that focuses on increasing the capacity of the community to take on racism through public forums and leadership training on race, multiculturalism, and justice. Since then, the campaign has grown to include more campus and community partners and take on more issues through on-going engagement. 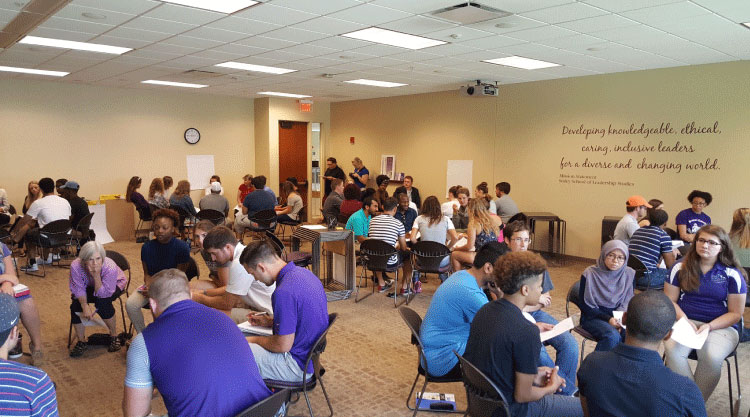 Cats for Inclusion and guest facilitators from the K-State Community work through challenging group dialogues at their first Public Discussion and Civic Leadership Training of the semester on September 3, 2016. "We're going to need more chairs," said Dr. Brandon Kliewer of the Staley School of Leadership Studies, remarking on the strong turnout and response from the community in an article about the event, published by the K-State Collegian.

From a glimpse into Dr. Brandon Kliewer’s classroom of Lead 405: Leadership in Practice, you would observe students leveraging a multitude of leadership skills and perspectives as they work to diagnose systemic issues, including racism. These civic leadership undertakings ripple outward, as students convene and facilitate public forums throughout the semester for the Cats for Inclusion campaign. Caden Laptad, a senior in education, was a student and forum facilitator during the first semester of the campaign and has continued his involvement since then. “Lead 405 was one of the best classes I've ever taken. Not because I learned a bunch of random facts and knowledge, but because it helped me understand what it meant to be truly connected to my own fragile, beautiful humanity,” Laptad said, “I learned how to really, truly weep. I learned how to allow my heart to be overcome at the sight of injustice, to experience an overwhelming sense of empathy that placed people before problems and looked at the world through many lenses.”

Individuals attending the forums can expect to transcend boundaries and engage in the public narrative process, allowing them to identify shared values, visions, and experiences through storytelling. "Dialogue is a necessary initial step to invoking a commitment to true institutional change," said Bryan Davis, President of the Black Student Union, junior in management information systems, and current student in LEAD 405. Haley Brun, a senior in mechanical engineering, is also a student in Lead 405 and had the opportunity to facilitate at the first public forum of this academic year on September 3. "As a facilitator, it was powerful to see how the conversation went from simple introductions to deep thoughts about creating an inclusive world," said Brun. 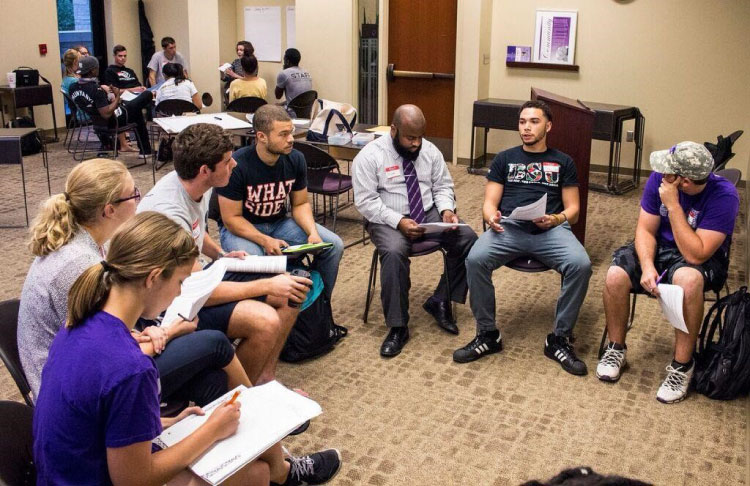 Members of K-State Black Student Union and students from LEAD 405 facilitate a Community Conversation during one of the first semesters of the Cats for Inclusion campaign. They are joined in this photo by Bryon Williams, Assistant Director of Admissions and Adviser to Black Student Union.

In this collective endeavor to create a more inclusive campus, Davis shared that individuals must be proactive in identifying racism and express the impact of intolerance through personal narratives. "The signature feature of our public forums is the "next story," where individuals think about what they personally are willing to do to make progress on this issue," said Kliewer.

The Cats for Inclusion campaign helped Hector Martinez-Rosales, a senior in architecture, discover his role in the "next story." Inspired and fueled to make a change, his work sparked another project: the Canvas of Diversity (pdf). "Hearing about our need as a campus to show unity and to also have a space to display that unity proudly helped me imagine the need for a public "canvas," said Martinez-Rosales. During the spring semester of 2016, the construction sheetrock dwelling in the heart of the Student Union renovation soon became an enthralling public display, composed of student artwork that brought to essence K-State’s multicultural integration. "We received beautiful entries from student organizations, Greek life, and other multicultural programs," said Martinez-Rosales. 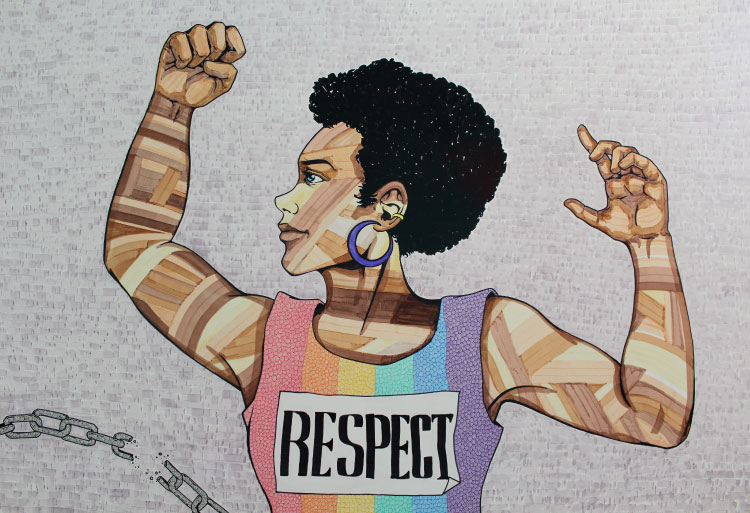 This original artwork by Maria Vieyra, junior in psychology, was submitted and displayed at the Canvas of Diversity event in the spring of 2016. Vieyra's submission took First Prize at the exhibit.

In addition to the Canvas of Diversity and other projects, student activism through the Cats for Inclusion campaign helped create momentum for the President's Cabinet Subgroup for Diversity. Through engagement with the campus community, K-State Student Governing Association, in conjunction with the university's multicultural student organizations, established a set of recommendations (pdf) to supplement K-State 2025's goals with an updated list of specific action items around diversity and inclusion. Continued progress on these goals will take place through further dialogue on these co-created outcomes among the students, faculty, staff, and administration of Kansas State University.

As the K-State community continues its pursuit of a more inclusive family, people-focused engagements like Cats for Inclusion will continue to identify issues and move forward with meaningful action steps to achieve the shared vision of K-State 2025. Students and community members have a collective responsibility to think critically about their role in the “next story” and are invited to participate in the Cats for Inclusion public forums taking place on October 2nd and 27th. Social media platforms, including Cats for Inclusion on Twitter and the hashtags #CatsForInclusion and #Diversity2025, will live on as spaces for collaborative dialogue and discussion around the ways K-State can move forward—together—to build a better future for all.