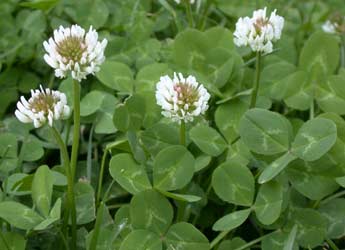 White clover is a cool season perennial that reproduces primarily by seeds. It creeps to form patches in turf and emerges from a fibrous root system. It can root at nodes on creeping stems. The leaves are composed of three un-stalked oval leaflets, up to 4/5 inch long. They are dark green and often with faint, white, crescent-shaped markings. White clover inflorescences occur in ball-shaped white to pink clusters of pea-shaped flowers. The inflorescences are up to 1 1/4 inch in diameter, composed of 40 to 100 flowers, and appear May to September.

This weed occurs in most lawns and especially in moist, low-fertility soils throughout growing season.

To control without chemicals, maintain turf density and health through proper culture. Do not fertilize heavily with phosphorus. Mechanically remove or hand pull.

Apply postemergence broadleaf herbicides in mid spring to early summer and/or mid to late autumn when weeds are growing actively.

White clover was formerly a common component of turf mixes due to its ability to fix nitrogen. It is still currently available in mixes or by itself and may be useful in low management turf areas. It has the ability to persist at short mowing heights and can attract bees to lawns.