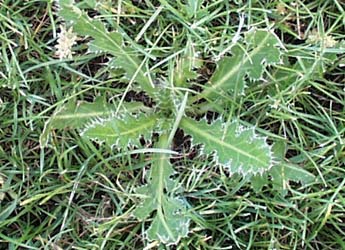 Musk Thistle belongs to the Asteraceae sunflower family. It is native to Europe and Asia and brought to North America in the 1800's. It can be found in pastures, along roadsides and rangeland.

The leaves have a waxy surface with sharp spines all around. The musk thistle can produce many heads that can produce up to 1200 seeds per flower head. The seedlings start to appear in the early spring and grow into rosettes and stay that way over the winter until the next growth stage where it produces the long shoot and flower. The thistle spreads by seed, so the best way to control it is by preventing seed production.

Grows well in full sun and adequate moisture and in open disturbed areas.

It can be controlled by digging it up with a shovel or spade or mowing the flowers and burning the debris.

Hard to control a mature plant. Several herbicides are effective when applied to the rosettes in the spring or fall to eliminate seed production.