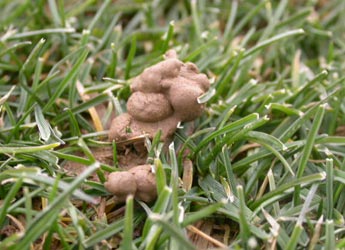 Earthworms present in a turf situation are normally considered beneficial. They contribute to a favorable growing environment by mixing and aerating the soil, decomposing plant residues like thatch, helping increase nutrient availability, moving immobile nutrients through the soil and improving soil structure by promoting aggregation, which in turn improves drainage and aeration. On closely mowed turf, however, an abundant active earthworm population may leave numerous “middens” or piles of soil at the turf-soil interface. These middens consist primarily of castings or fecal material and plant residues from where the earthworms have pulled plant residues into the mouth of their burrows so the residues can soften and be consumed later. They also function as protection for the earthworms. In abundant quantities these small piles are unsightly and when allowed to harden may lead to a “lumpy” surface which can interfere with the use of some turf areas. Additionally, earthworms are the preferred food for moles and turf areas may be disrupted by foraging moles. There is not evidence, however, that reducing earthworm populations will solve a mole problem.

Earthworms are active anytime the soil temperature is above freezing. They are most active, however, when soil moisture is at or above field capacity and in dark colored soils rich with organic matter or where organic manures have been frequently applied. Overall, the presence and activity of earthworms is indicative of a healthy soil. In fact, pasture management researchers have reported earthworm populations ranging from 3,600 to 14,000 per square foot depending upon how much manure had been applied. Earthworms tend to be most active following rainy periods when the come to the soil to search for food and mate. Earthworms are classified in three categories: Litter dwellers , which reside in the top 0 to 6 inches and are very important in surface nutrient cycling and organic matter decomposition, Surface dwellers , which live in the top 12 to 15 inches and are responsible for mixing and incorporation of organic matter and the Deep burrowers which can travel as deep as three to six feet and responsible for deep water infiltration. Several species of earthworms are found throughout the United States but the traditional “Nightcrawler” (Lumbricus terrestris) and the red earthworm (Lumbricus rubellus) are the most common species in the North Central region. It is understood that L. terrestris is native to Europe and was introduced in America like many other potential pests such as the Japanese beetle. Nightcrawlers are typically about 4-8 inches long and considered deep borrowers building long vertical tunnels that can extend five or six feet.

Earthworms are beneficial soil organisms and normally no controls are recommended. Where earthworm castings are a chronic problem and interfere with the use of the turf area, water-filled rollers or whipping poles may reduce the unsightly mounds. Additionally, recent research has suggested that regular applications of coarse textured topdressing materials like sand may help reduce their activity at the soil surface. It is hypothesized that since the cuticle (skin) of earthworms is remarkably sensitive, sand or other abrasive substances probably irritates and repels them.

As stated earlier, earthworms are beneficial soil organisms and normally no controls are recommended. No pesticides are labeled for earthworm control. Applying a pesticide for the control of earthworms that is not labeled to controll earthworms is called off label and is against the law.