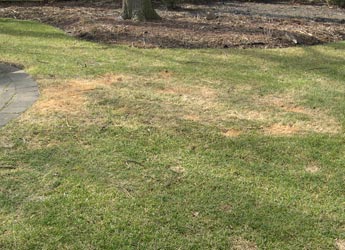 Animal Urine can be an aggravating problem for anyone attempting to maintain a medium to high quality lawn. Concentrated urine from numerous animals including foxes, deer, geese, cats and dogs has the capacity to injure or severely damage turfgrasses. For the homeowner, however, domesticated animals like dogs that frequently use a specific part of the lawn may create undesirable scattered patches of greener and/or brown turf. Most often the affected turf takes on a greener appearance and has a faster growth rate than the surrounding turf. These patches disrupt the overall stand uniformity and the entire area may require additional mowing just to keep the turf canopy at the desired mowing height. This additional effort can be annoying to the homeowner who wants a low maintenance lawn. In severe situations, where numerous patches coalesce the damage may be significant enough to require reseeding or sodding. Although the exact mechanism for the animal urine injury is not completely understood, it is believed that damage occurs primarily due to highly concentrated salts contained in the urine. This is based on the fact that excess fertilizer salts spills on localized turf areas elicit a similar symptom.

Animal urine has the capacity to damage every turfgrass species in any climate. The most severe damage seems to occur during dry periods when soil moisture is low and the turf is poorly hydrated. Unfavorable hot weather may exacerbate the condition for cool-season turfgrasses. The typical turf response is that the turf receiving the highest concentration of urine initially takes on a gray-green, wilted appearance, which rapidly fades to a light brown dead color. Turf death may occur in 24 hours or less under favorable environmental conditions. A dead patch of turf does not always occur but when it does, the central crater of brown turf (3 to 6 inches in diameter) will be surrounded by a luxurious, deep-green ring of turf (6 to 12 inches in diameter). This combination of very green and dead brown turf patches may persist for several weeks depending on the vigor of the surrounding turf and its capacity to recover and fill-in. The greening effects are most noticeable in turf areas that have received minimal nitrogen applications because the nutrient starved turf readily responds to the quickly available water soluble nitrogen contained in the urine. The turf responds with rapid greening and additional foliar growth. These responses may also occur in well fertilized turf and are particularly evident during the early spring and summer months when many lawns have not recently received any nitrogen fertilizer or the turf is not actively growing due to unfavorable environmental conditions for growth. Several common turfgrass diseases like summer patch or dollar spot, which frequently affect Kentucky bluegrass during the warmer months and forms patches and craters, may be confused with animal urine damage. Damage from animal urine can be distinguished from that of turfgrass diseases because no cottony mycelium is present and the dying leaf blades do not appear water-soaked or mat down like those affected by a fungal infection.

Of the common household pets, dogs tend to be more damaging to turf than cats simply due to the larger quantity of urine produced. Furthermore, the elimination behavior of cats differs from dogs in that cats generally mark bushes or trees rather than eliminating on the lawn. It has been suggested that female dogs are more of a problem than males, probably due to the difference in their voiding behavior. Female dogs typically squat when they urinate and males leg-lift. However, young dogs of both sexes normally squat to urinate and the typical leg-lifting and marking behavior of male dogs does not become prevalent until the dog is about 1 year of age. In addition to squatting, female dogs do not discriminate as to where they void and typically release all of their urine once in one concentrated location. Combined these factors associated with female dog elimination behavior are conducive to turf damage. In addition, numerous speculation abounds among pet owners regarding the impact of female dog urine constituents. Some people have suggested that pH, or hormone content of spayed vs. non-spayed dogs may have an influence on the problem. To date, however, none of these factors has been thoroughly tested or proven to contribute and the voiding behavior of female dogs probably plays a more important role.

The following are some suggestions that may help to minimize the effects of animal urination on a lawn. Realize, however, that the only way to be assured of animal urine not damaging turf is to completely remove the pet from the lawn, which for most pet owners is not practical.