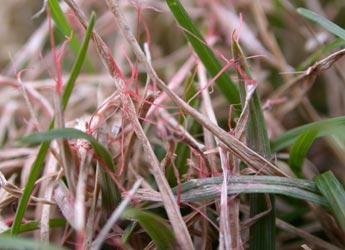 Red Thread is a foliar disease that usually occurs on taller mown turfgrasses during spring and fall. The effects of the disease are largely cosmetic: crowns and roots are not infected, therefore plants are not killed, and the turf eventually will recover. Red thread symptoms contribute to a generally undesirable appearance. Red thread takes its name from the antler-like structures (sclerotia) produced by the fungus (Laetisaria fuciformis) on the tips of affected leaf blades. The red or pink sclerotia are apparent without magnification and are useful in the identification of the disease in the field. From a distance, red thread symptoms appear as circular patches of tan or pink turf ranging from 4” – 8” in diameter. Kentucky bluegrass, perennial ryegrass, and tall fescue are most commonly affected by red thread.

Fungicides are not advised for red thread control on home lawns for various reasons. A red thread outbreak signals a more immediate problem with the health and vigor of the lawn. In almost all cases, practices that result in a well-nourished lawn also will result in suppression of red thread development. Also, most effective chemicals are not labeled for use by home owners and are difficult to apply properly. A licensed professional applicator should be used to apply most fungicides, thereby increasing treatment costs. Finally, the turf will recover to some extent with even a modicum of care because red thread does not affect the turfgrass crowns and therefore usually does not kill the plants.