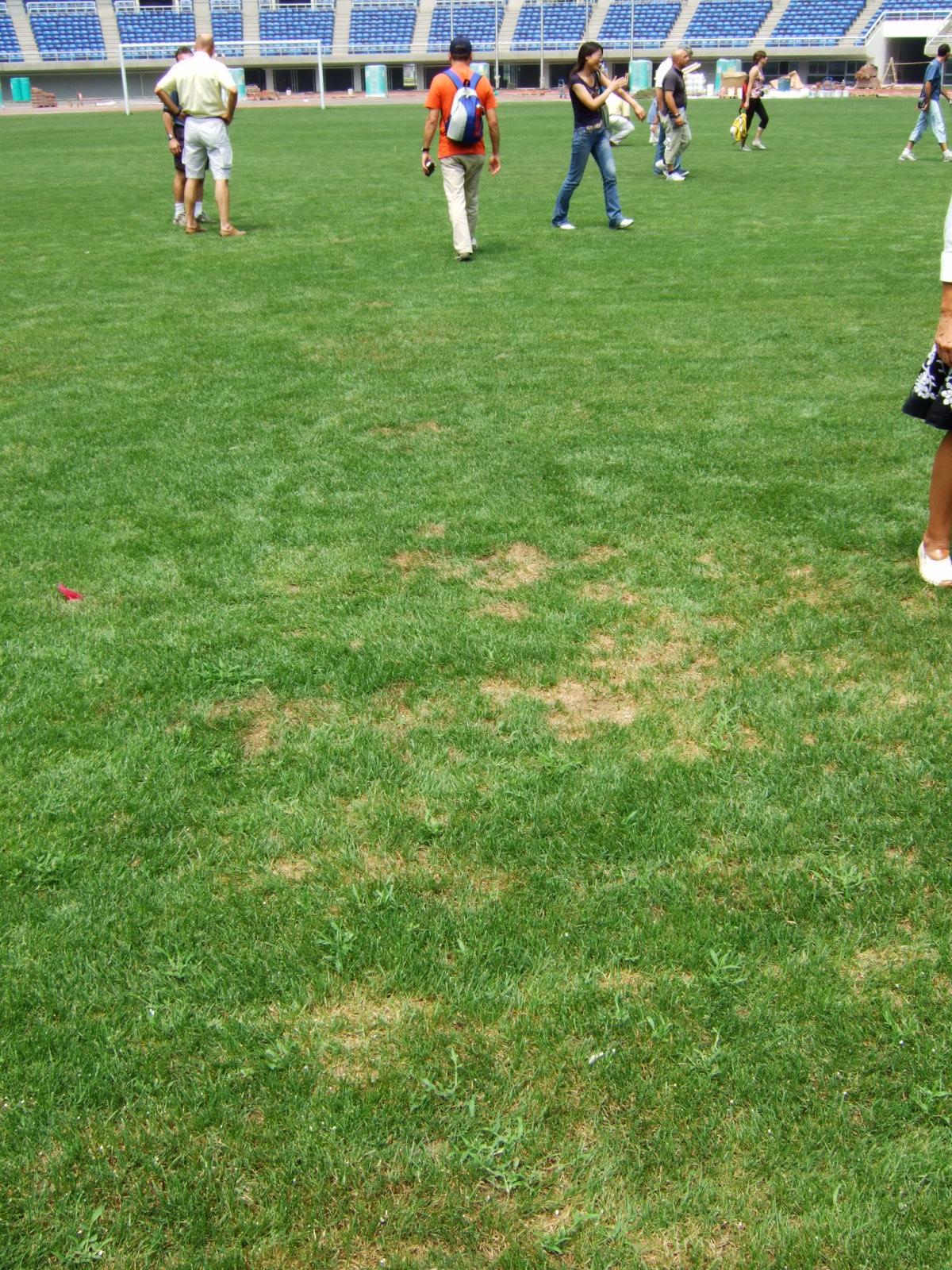 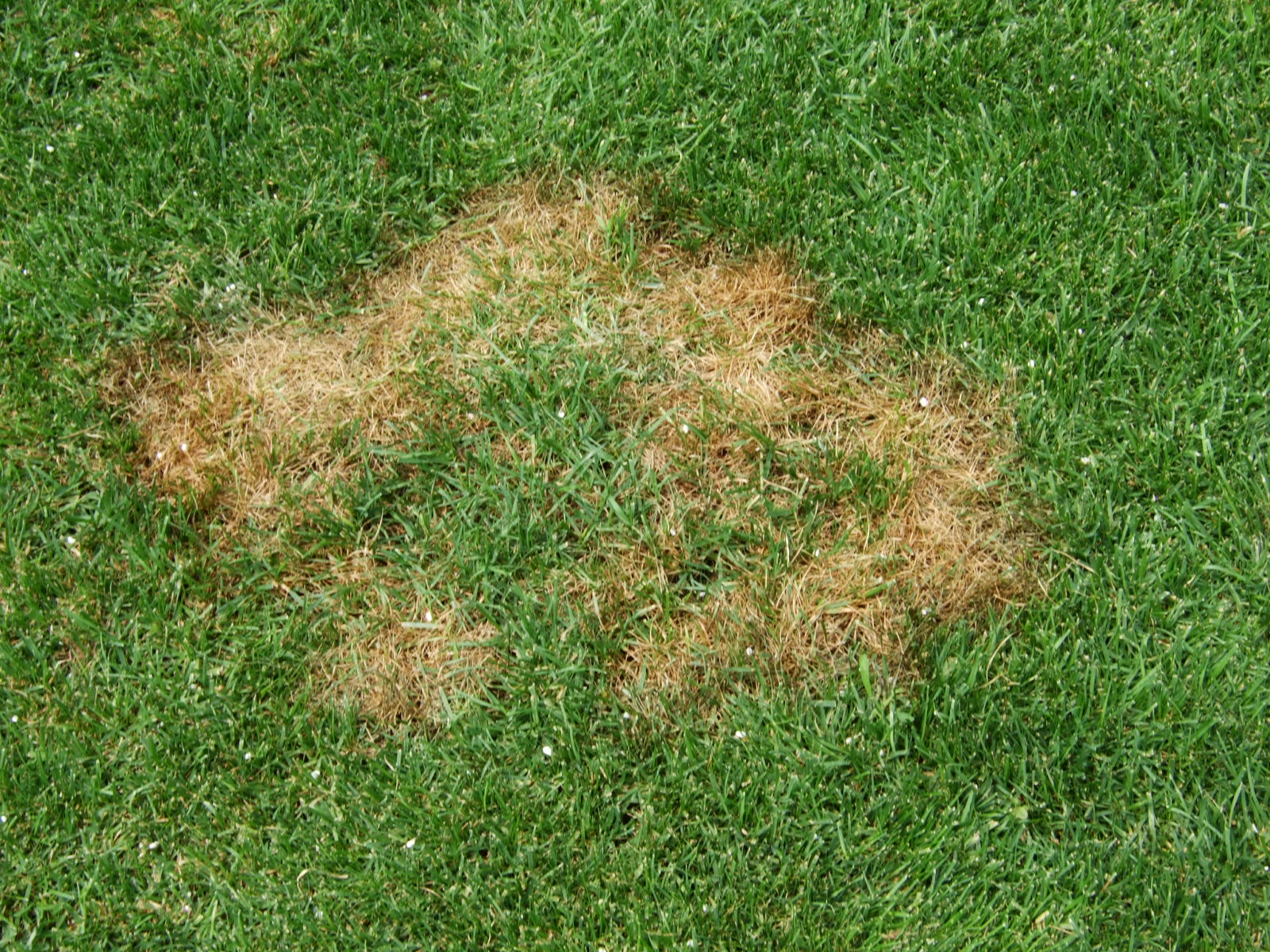 Pythium blight attacks all cool season grasses, but outbreaks are especially damaging to creeping bentgrass, annual bluegrass, and perennial ryegrass. Pythium development may occur on Kentucky bluegrass and tall fescue, but disease severity is often limited and damage is manageable. Among turfgrass diseases, Pythium blight receives considerable attention because it spreads very quickly, affects leaves and crowns, and kills plants, resulting in extensive loss of the turf stand. Initial symptoms include small circular patches of collapsed, water-soaked leaves and stems on close mown turf. The cottony white mycelium may be associated with affected plants if observed early in the morning. If disease favorable conditions persist, and no efforts are made to interfere with disease progress, large areas of turf may be killed within a matter of days.

Pythium blight occurs during the most uncomfortable days of summer, when dew periods are long (greater than 14 hours) and evening temperatures average 68° F or higher. Outbreaks often are first observed in low areas or swales, where more soil moisture is maintained and dew begins to form early in the evening and remains through the morning. Late afternoon rain-showers during these hot humid periods further favor disease development and may be responsible for rapid spread of the pathogen. Turf with lush growth and excessive nitrogen fertility is especially vulnerable to infection. The Pythium fungus over winters in soil and plant debris. Spread is associated with water movement. Also, the fungus is readily spread by equipment after affected areas are mowed while they are still wet.

Varieties of creeping bentgrass and perennial ryegrass appear to be equally susceptible to Pythium blight infection. Other species are somewhat less susceptible but varietal differences within species have not been identified, and they may not be suitable replacements for susceptible species. Modifying the environment may contribute to a reduction in the severity of Pythium blight. Water management and proper drainage to avoid waterlogged root zones during summer are especially important. Selective pruning of trees and shrubs will help circulate air and dry turfgrass surfaces, effectively limiting the duration of the dew period. Avoiding conditions that approach excessive nitrogen fertility during mid-summer will reduce vulnerability to Pythium outbreaks. Because of the survival and spread characteristics of the pathogen, Pythium outbreaks normally occur in the same “problem” areas each year as hot and humid weather conditions prevail. Mowing in those areas should be delayed until surfaces are dry.

Pythium blight is a serious threat to perennial ryegrass lawns. Areas with restricted air movement are most vulnerable to infection. Control practices for residential lawns are based on avoiding excessive nitrogen fertility in mid-summer, avoiding early evening irrigation, and improving air circulation to hasten drying of leaf surfaces. If extensive turf damage caused by Pythium blight occurs annually, over-seeding or re-seeding affected areas with Kentucky bluegrass is recommended. Fungicides should be considered as a last option. Because the most effective fungicides may not be effective against any other diseases, distinguishing between Pythium blight and other diseases that may occur during the heat of the summer (brown patch, gray leaf spot, summer patch, and dollar spot) is especially important. A professional lawn care service should be contracted for best results regarding product selection and timing of the application(s).