MANHATTAN — One of the nation's leading authorities on school finance says the term "extracurricular" should be replaced with "co-curricular" to show how these activities supplement what is being learned in the classroom.

David C. Thompson, professor and chair of the educational leadership department in Kansas State University's College of Education and the author of multiple textbooks on school finance, has spent more than 40 years in public education. In 2013, he was awarded the National Education Finance Conference's lifetime achievement award.

"I've been a proponent for a lot of years that says 'extracurricular' is one of those words that ought to be banned from the language," Thompson said. "The reason is that I don't regard anything as 'extra' in what schools do. I call it co-curricular. That includes school buses; it includes social workers; it includes counselors; it includes administration; it includes one of my favorites, food service. Who would argue that children who come to school hungry are ready to learn?"

Thompson said funding cuts are very difficult for administrators because what students learn is not limited to the classroom.

"School districts, school superintendents and school boards don't have choices when they are told they are either not going to get new resources or their resources are going to be reduced," he said. "Very often there is some level of reduction or some level at least of very agonizing tension in a school district about where to make those cuts. It's very popular in the current sort of idiom way to talk about dollars in the classroom, but that's exactly the point that I am making. Where does the classroom stop?"

When it comes to school funding, Thompson said the state's block funding formula essentially takes a snapshot of the good and bad parts of a budget and makes no exceptions for changing demographics.

"The block grants freeze things in time," Thompson said. "Block grants ignore things of the future. They're touted as being high levels of flexibility at the local school district level, but my honest professional opinion is that if you were to go to lots of school districts in Kansas and ask them how much they have gained from it, that their answer, for the most part, would be, 'I'm too busy trying to cover unfunded expenses to worry too much about any imaginary flexibility I've received.'"

Thompson believes block grants are a funding formula from the past.

"From a purely academic perspective, and here I'm leaving aside the politics of the matter, a flat grant has never had any real champions in people who are like myself for at least the last 100 years," he said.

While Thompson readily admits there are challenges, he is encouraged by current conversations relative to education funding in the Kansas Legislature that he doesn't believe would have taken place over the last year or two.

"I'm grateful that the conversation is happening," he said.

Thompson served as a teacher, principal and school superintendent before entering higher education. His books are used in more than 200 universities in America. 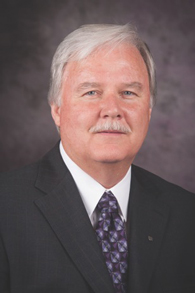 Kansas State University's David Thompson, professor and chair of the educational leadership department, is a school finance expert. Thompson has more than 40 years of experience in public education and his textbooks of school finance are used at more than 200 universities in the U.S.