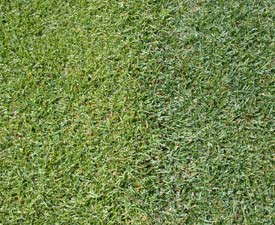 Careful turfgrass selection is an important first step in establishing, overseeding, or renovating a turfgrass. Many potential problems related to turf use, appearance, environment, insect or disease pests, and cultural practices can be avoided by properly choosing species and cultivars that best fit the situation in which the turfgrass will be grown.

Consider these criteria when selecting a turfgrass:

Turfgrasses differ with regard to these criteria. For example, some Kentucky bluegrass cultivars form a dark emerald green turf adapted to high maintenance and light shade. This can be contrasted with buffalograss, a gray-green, low-maintenance turfgrass that performs poorly in light shade. Other differences among species and cultivars also exist regarding wear tolerance, environmental adaptation, pest resistance, and cultural requirements. Careful selection at planting time is the best way to solve potential problems in the future.

Generally, the cost of planting turfgrasses, whether from seed, sod, plugs, sprigs, or stolons, should be of minimal concern. In most normal plantings, the cost difference between poor-quality and high-quality seed or vegetative propagules is small, and the time and money spent trying to produce high-quality turf from low-quality seed or vegetative material can often become great. The long-term benefit of planting high-quality turfgrasses in appropriate conditions is a healthy, cost-effective, quality turf.

Turfgrass Categories Based on Function, Maintenance, and Quality

Turfgrasses grown for their aesthetic appeal, moderate maintenance, and moderate to high quality are placed in the lawn turfgrass category. Common and improved types of Kentucky bluegrass, perennial ryegrasses, turf-type tall fescues, fine fescues, bermudagrasses, zoysiagrasses, and buffalograsses are included in this group. These turfgrasses are commonly planted on home lawns, commercial areas, park settings, and other landscape areas requiring turf having a good appearance.

Three other turfgrass species, bermudagrass, zoysiagrass and buffalograss, are occasionally grown in areas of the Midwest. These are warm season grasses, that is, grasses more tolerant of high temperatures and drought conditions than their cool season counterparts. Optimum growth of these grasses occurs when soil temperatures are between 70° and 90°F and air temperatures are between 80° and 95°F. Bermudagrass is the least cold tolerant of the three and may best be used in the southern areas of the Midwest. Buffalograss is the most cold tolerant of this group and can perform admirably in most areas of the region. Zoysiagrass is intermediate in cold tolerance; it should be grown in the central and southern portions of the Midwest. All three of these species, unfortunately, do not maintain green color and active growth in cool temperatures from mid-autumn through mid-spring. When dormant during these periods, they are brown and unattractive. Bermudagrass and zoysiagrass are most commonly established vegetatively (sod, sprigs, plugs, or stolons); buffalograss can be established by seed or vegetatively.

Cultivars and Varieties, and Blends and Mixes

Cultivars and varieties can be considered subtypes of a given turfgrass species. Cultivars and varieties possess most of the characteristics common to a turfgrass species, but are selected because they have a desirable trait(s) that sets them apart from the majority of the species population. For example, 'Merion' Kentucky bluegrass was selected and sold as a cultivar because it possessed a resistance to leaf spot that common Kentucky bluegrasses did not have. Another example, 'Shortstop' tall fescue, is different from most other tall fescues because it has a lower growing point and finer leaf texture.

In the majority of settings in which cool season turfgrasses are grown, it is recommended that mixes (combinations of two or more species of turfgrass) and/or blends (combinations of two or more cultivars of the same species) be planted. By combining compatible grasses, growers can create greater tolerance to varied growing conditions in their turf sites. In addition, different grasses can bring varied pest tolerances and resistances to a site, thus reducing the potential for extensive turf damage caused by a single disease.

Turfgrass Species for the Midwest

The most commonly used turfgrasses in the Midwest are Kentucky bluegrass, perennial ryegrass, tall fescue, fine-leaf fescue, creeping bentgrass, and zoysiagrass. These species vary in growth habit, appearance, and maintenance requirements. The next sections will describe these turfgrasses (also buffalograss) and will detail their characteristics. Growth habits include rhizomatous (spread by underground stems), stoloniferous (spread by aboveground stems), and bunch (gradual increase in clump size). Appearance characteristics include overall turfgrass quality based on a combination of turfgrass color, leaf width, and density. Maintenance requirements include mowing, irrigating, fertilizing, cultivating, and controlling pests.

In addition, these grasses differ in environmental adaptation, wear tolerance, recuperative ability, and use. Environmental adaptation refers to the environment in which each turfgrass will normally perform best. For example, each turfgrass performs best in a particular type of soil and in a certain amount of light. Wear tolerance refers to a turfgrass's ability to withstand traffic, while recuperative ability indicates the turfgrass's ability to recover after damage that can result from insects, diseases, traffic, or environmental stresses. Finally, for each of these turfgrasses, information concerning normal uses is presented.

Other Species Occasionally Used in the Midwest

Rough bluegrass is a stoloniferous, fine-textured, cool season turfgrass that produces a poor quality turf. It does, however, have the ability to survive in wet, shaded areas better than other commonly grown turfgrasses. 'Sabre' rough bluegrass has been selected as an improvement on common rough bluegrass.

Bermudagrass is a rhizomatous/stoloniferous, warm season turfgrass that is used occasionally in the southern portion of the Midwest. It has good heat and drought tolerance and exhibits good wear tolerance. In contrast to zoysiagrass, it can be established quickly, usually in 6 weeks. On the other hand, bermudagrass has poor cold and shade tolerance. It may periodically be damaged or killed during cold winters throughout the Midwest. 'Midiron' and 'Midway' bermudagrasses are vegetatively propagated types that have exhibited better cold tolerance than most other bermudagrasses. Several new seeded types are available, but have not been adequately tested in the Midwest to warrant recommendation.

The effort and time expended selecting the right grass species, mixes, and/or blends will be well spent. Consider the site, use, desired appearance, and management the turf will receive when selecting the species combination. Then select cultivars that best fulfill the desired outcome. Often, there may be more than one "good fit" between turf species, mixes, and/or blends for the specific situation. In such cases, cost and availability may become important factors in the final decision. Plant only high-quality propagules (e. g., seed, sod, plugs). When these steps are followed and the actual turf is planted, many potential problems will be reduced, or in the best of situations, eliminated.