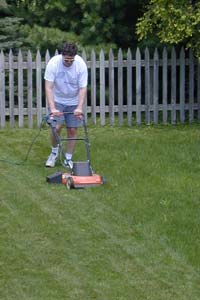 From the human perspective, mowing is the most basic and time consuming of all turf maintenance activities. We generally mow turfgrasses for two reasons. The main reason for mowing most turfgrasses is to improve appearance. Mowing turf at appropriate heights and frequencies is a major component of a turf management scheme designed to develop a dense, actively growing, attractive turf. In addition, another reason for mowing turfgrasses is to produce recreational or sports playing surfaces. Many outdoor athletic or play activities, such as golf, tennis, lawn bowling, baseball, soccer, and football, take place on turf surfaces specifically mowed and managed to accommodate these activities.

Thus, for these reasons, it is important to find the balance that produces attractive, healthy turf in an efficient manner. To assist turf managers find the balance between turf and human needs, information about mowing height, mowing frequency, general mowing practices, handling clippings, and types of mowers requires consideration.

A neatly trimmed lawn is generally considered to be more attractive than one that is unkempt and shaggy. By mowing frequently and maintaining a uniform turf surface, a neat appearance can be achieved, even at taller heights. Unfortunately, however, a common perception is that a short turf is superior in appearance to tall turf. In reality, turf that is uniform appears neater than uneven turf, regardless of height. Proper height and frequency are the two most important aspects of a turf mowing program.

Mowing turf at the appropriate height is important to turf health and appearance. Turf cut too short usually has a shallow root system, lacks density, and often requires pesticide applications to stave off weed and pest infestations that commonly occur in stressed lawns. Conversely, tall turf is often considered to be unattractive because of wide leaf blades, low density, and a clumpy, unkempt appearance. In addition, tall turf may not be satisfactory for some sports applications.

Mow turfgrasses according to the heights presented in the table below. Note that a range is listed for each species. When healthy and actively growing, turf can be mowed at the lower heights; raise mowing heights within the desired range during warm-hot periods or when turf is stressed due to drought, disease, shade, insects, or traffic. The heights listed in this table provide a balance between turf appearance and health.

Turf should be mowed as necessary, not according to a preset schedule. Turfgrasses grow at different rates depending on weather, management, and species. A basic recommendation is to remove no more than one-third of the grass blade at any one mowing. For example, Kentucky bluegrass being maintained at 2 inches should be mowed when it reaches 3 inches. This “one-third rule” will help maintain maximum turf root growth. Removing more than one-third of the grass blades may cause root growth to cease while the leaves and shoots are regrowing. This practice can be especially destructive if practiced continuously over a period of successive mowings. Roots may not have a chance to fully develop and the plants will thus be more susceptible to environmental and management stresses. Maintenance of healthy, growing turf root systems should be a primary consideration of any turf management program. 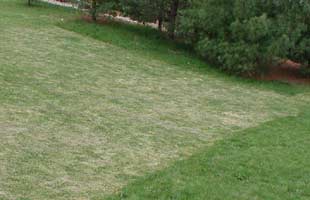 Removing over one third the height of the turf in
one cutting and setting the mower at less than
2 inches has stressed this lawn and created
noticeable brown areas.

Occasionally, personal schedules or weather conditions prevent turf mowing when it is needed. If this occurs, attempt to mow using the one-third rule. If turf is 6 inches tall, and the desired height is 2 inches, the first mowing should be at 4 inches, or at the highest setting nearest to 4 inches . Several days later, mow again by reducing the mowing height using the one-third rule. This mowing should be lower than 4 inches in height. Continue this pattern until turf is adjusted to the proper height.

Two other basic mowing recommendations are to maintain mower blade sharpness, and to mow when grass is dry. Dull blades tear turf leaving a ragged appearance. In addition, turf water loss and the incidence of turf diseases can be greater from ragged leaf edges than from cleanly cut grass leaves. Thus, cleanly cut turf generally looks better and is often healthier than turf with torn leaves. Also, mow when turf is dry. Wet turf may clog the mower or form clumpy masses on the turf’s surface. 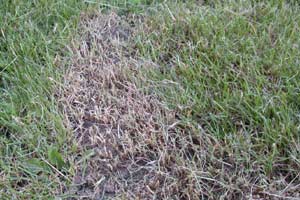 In a lawn already being mowed at a low height,
a slight depression caused an area of serious
scalping.

When turf is cut excessively short, scalping can occur. Scalping can occur as the result of irregular land contours, excessive thatch, infrequent mowing, or poor mower adjustment. Scalped turf usually appears brown and stubbly due to the removal of healthy leaves and exposure of turf crowns, dead leaves, or even the bare soil. Avoid scalping turf as it can result in unattractive appearance, and in some cases, severely scalped turf may not recover.

Frequent and close mowing in the same direction or pattern can cause the turf shoots to lean in the direction of cut causing grain to develop. On closely clipped turf, such as a golf course putting green, grain is undesirable because it can alter the path of a putted ball. By altering the mowing pattern with each mowing, the turf shoots tend to grow more upright which reduces grain. In addition, altering the mowing pattern changes the position of the mower wheels or rollers at each mowing which can reduce excessive wear in the same location.

Athletic turf managers sometimes use mowing patterns to provide visual interest for their fields. On these fields, the turf is mowed frequently in the same direction using reel mowers to provide striped or checked patterns. Football and baseball fields are often cut in this fashion.

First and Last Mowing of the Growing Season

The first and last mowing of the year are sometimes handled differently than other mowings. Before the grass begins to grow, in spring mow the turf slightly shorter than normal to remove dead blades and other debris. Be careful not to scalp turf during this initial mowing. Once turf begins active growth, mow at the proper height and frequency. The last mowing of the year should be at the normal mowing height. Turf should neither be cut excessively short nor allowed to become excessively long going into winter.

Mowing results in the production of grass clippings. There are several ways of dealing with clippings, but in general, clipping collection is not necessary, provided proper turf management occurs. Using the one-third rule of mowing is especially important when clippings are not collected because small leaf portions readily filter to the soil surface and decompose quickly.

Returning Clippings to the Turf

Returning clippings to the turf has several benefits. It obviously eliminates the need for disposal in landfills and also reduces the time and energy required to transport clippings to composting facilities. In addition, when clippings are returned to the turf, the consumer does not bear the cost of commercial composting.

When clippings are returned, a small quantity of organic matter and substantial quantities of mineral nutrients are returned to the soil, contributing to improved soil conditions. In one Colorado study, the annual quantity of nutrients produced in clippings from 1,000 square feet of highly fertilized Kentucky bluegrass turf was 5.7 pounds of nitrogen (N), 0.6 pounds of phosphorus (P), and 3.4 pounds potassium (K). Even when grown at very low fertility, 1,000 square feet of Kentucky bluegrass clippings annually yielded 1.0 pound N, 0.1 pound P, and 0.7 pound K. The result of returning clippings is that mineral fertilization can be reduced while still producing turf of high quality.

With regards to minerals, the benefits of returning clippings can occur quickly. When returned into a healthy turfgrass growing environment, clippings were found to release nutrients into soil in as little as 14 days in another study.

Not collecting clippings also saves time and expense. Mowing is not interrupted for emptying grass catchers. The Colorado study discussed earlier found that 1,000 square feet of highly fertilized Kentucky bluegrass yielded 529 pounds of clippings in one year. If clippings were collected, work stoppage would occur 22 times to empty a basket that accommodated 25 pounds of clippings.

Clippings are often thought to contribute to thatch build-up. This is not the case unless excessively long clippings are returned to turf. Thatch is composed primarily of turfgrass roots, crowns, rhizomes, sheaths, and stolons. These plant parts contain large amounts of lignin, a waxy substance that decomposes slowly. Turf clippings contain little lignin and are usually composed of at least 75 to 85% water. After drying, short clippings break down quickly. Clippings may, however, contribute to thatch when tall grass is mowed too short, resulting in large clippings. Mowing at proper intervals insures small clipping size and rapid clipping breakdown.

When turf is extremely tall, mowing will produce long clippings. Long clippings can contribute to thatch because they break down more slowly than short clippings, Also, long clippings on the turf surface can restrict light that is necessary for turf photosynthesis and can hold excessive moisture near turf which can cause disease invasion. 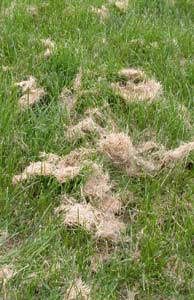 Excessive clippings on a lawn
are unattractive and unhealthy
for the turf. 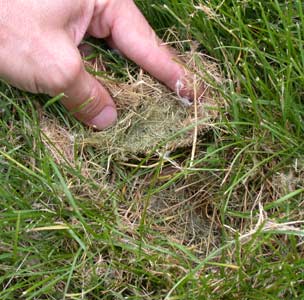 Lifting this clump of clippings revealed a
dead patch of grass beneath.

There are several ways of dealing with clippings if they are still visible on the turf surface 24 hours after mowing. By re-mowing the turf, the clippings will be re-cut and reduced in size. This will also redistribute the smaller clippings and allow them to filter to the ground. Another way to move and disperse clippings is by waving a long pole or garden hose through clumps of clippings.

Collecting clippings for composting or mulching is another alternative when long clippings remain on the turf surface after mowing. When collected for mulch or compost, try to air-dry clippings before use. Avoid using clippings recently treated with herbicides. It has been recommended that herbicide-treated clippings not be composted for at least three mowings following application

Reel and rotary mowers are the two most commonly used types of mowers. Either of these mowers can produce acceptable results provided mowers are well-maintained and proper mowing practices are followed. The following table compares characteristics of these two types of mowers. 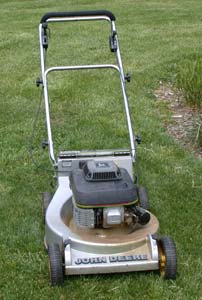 The rotary mower is commonly
used to cut home lawns. 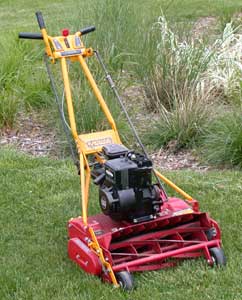 The reel mower is a good choice when
shorter mowing heights are desired.

Conventional mowers designed to discharge small clippings back to the turf often produce turf of acceptable quality. Reports vary regarding the need for mulching mowers. According to some reports, mulching mowers work well, while others indicate that mulching mowers can be difficult to operate if turf is long or wet. A study conducted at the University of Illinois determined there was no benefit to using a mulching mower, as compared to using a conventional rotary mower, provided mowing frequency and nitrogen rates were appropriate for the turf in use.

Mow frequently at the recommended height using the "one-third rule." Maintain blade sharpness, mow when turf is dry, and return clippings to produce the best quality, most healthy turf possible.