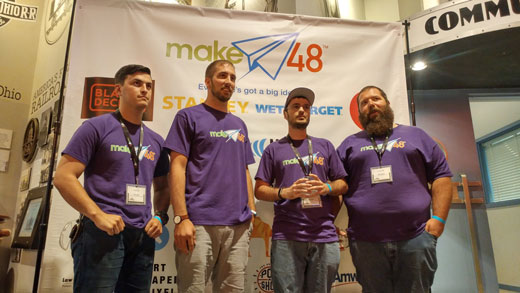 Four recent K-State Polytechnic graduates finished their college careers by participating in the national invention competition "Make48," produced by PBS. The team competed against 11 other colleges to plan, prototype and pitch a new product idea all within 48 hours.

The team, nicknamed WildCreates, included graduates Alec Cork, '18, electronic and computer engineering technology, and Zach Martin, '19, Cory Harvey, '19, and J.T. Brantley, '19, all in mechanical engineering technology. The filmed competition will air on local public television stations across the country. Starting Sept. 14, it will air on KCPT in Kansas City at 2:30 p.m. on Saturdays.

A panel of judges — Tom Gray, "Make48" CEO and senior strategist at The Handy Camel, Jenne Frackelton, senior buyer at QVC, and Jimmy DiResta, maker/YouTube sensation — chose three winning teams, who then worked on getting their products to market.

The team's mentor, Dustin Keiswetter '09, an engineering lab technician on campus, competed on the first season with two teammates and their idea, the Whizz Bang, was selected as one of the winning products.