K-State veterinarian says bats can be problem for pets, humans this time of year 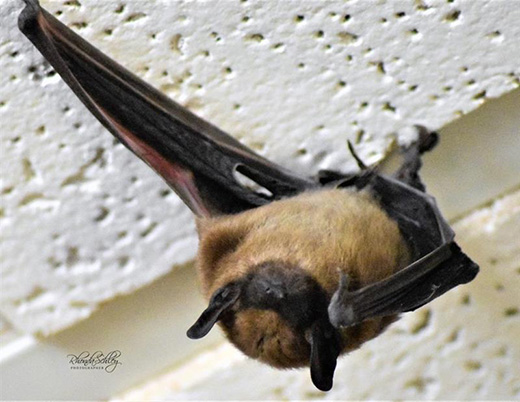 Bats are more active at this time of year, which means people and pets should beware. According to the Centers for Disease Control, bats are responsible for roughly 7 in 10 rabies deaths among people who are infected with the rabies virus in the U.S. Pictured above is a little brown bat by Rhonda Schley.

MANHATTAN — With fall approaching, a Kansas State University veterinarian says homeowners and pet owners need to be cautious of bats, which are a leading transmitter of rabies.

"Bats are more active this time of year, which means there is an increased chance of exposure to them," said Susan Nelson, clinical professor and veterinarian at the Kansas State University Veterinary Health Center in the College of Veterinary Medicine.

"While bats are essential for our ecosystem and most bats are harmless, we need to remember that in some situations, bats can be a threat to our health," Nelson said. "Any possible contact with bats by people or pets needs to be taken seriously."

According to the Centers for Disease Control, bats are responsible for roughly 7 in 10 rabies deaths among people who are infected with the rabies virus in the U.S. The CDCsays that many people do not realize that bats can transmit rabies and don't seek treatment when exposed to one. They often also don’t know that they have been bitten or scratched by a bat because of the small wounds that they leave.

Bats are a problem for animals as well, accounting for one-third of the 5,000 rabid animals that are reported in the U.S. each year.

If a bat is found in your residence, Nelson recommends having the mammal tested for rabies in the following situations:

• When you are scratched or bitten by a bat.

• When you handled a bat with your bare hands.

• When you woke up and found a bat in your room.

• When unattended young children are found in the same room with a bat.

• When mentally disabled or intoxicated people are found in a room with a bat.

It is important to take these situations seriously as rabies is almost always fatal after symptoms appear, despite treatment efforts, Nelson said.

If you find a bat in your residence, Nelson said the best thing is to carefully catch the bat without touching it and take it to your local veterinarian for rabies testing submission.

"We are fortunate enough to have the Kansas State University Rabies Laboratory in our own backyard, as it is only one of a handful of labs that do this type of testing," Nelson said.

Possible exposure to rabies is an urgent event, but not an emergency in most situations. This means that one can typically wait to receive post-exposure treatment until after the testing results are in, Nelson said, but there are some situations where it will be started right away.

Typically, it takes only a few days or less to receive test results. But if the bat is unavailable or unsuitable for testing, post-exposure treatment will likely be recommended in the situations listed above. Nelson said that your personal physician and/or local health authorities will ultimately determine if and when post-exposure treatment is needed.

The best way to protect pets from bat exposure is to keep their rabies vaccinations current, Nelson said, adding this is also important for indoor-only pets as bats are often found in the house.

If there's a possibility a pet was exposed to a bat, it should be taken to a veterinarian within 96 hours and get a rabies booster if the bat was unavailable for testing, Nelson said.

"If the bat is available for testing, there's time to wait and see if a booster is needed," Nelson said. "But if your pet is not vaccinated against rabies or not current on its rabies vaccine, your veterinarian will discuss options for vaccination and/or quarantine based on its current vaccination status."

Nelson said that some quarantine situations can last up to six months.

"Respect bats and what they do for our environment, but do take any possible exposure seriously," Nelson said. "And if you happen to overhear someone talking about any situations that could be considered as possible exposure to a rabid bat to themselves or a pet, do them a favor and recommend they submit the bat for testing or seek the advice of their physician or veterinarian if it is not available for testing. You may just save a life."

Bats are more active this time of year, which means there is an increased chance of exposure to them, according to a Kansas State University veterinarian.

"While bats are essential for our ecosystem and most bats are harmless, we need to remember that in some situations, bats can be a threat to our health. Any possible contact with bats by people or pets needs to be taken seriously."