The K-State School of Music, Theatre, and Dance will perform "IN PROCESS: Creating Songs for the Stage," an in-person musical in Memorial Stadium, at 8 p.m. April 9 and 10 and 2:30 p.m. April 11. The production features scenes and songs from new musicals in development by four K-State alumni.

The cast will perform on the bleachers of the West Stadium with the audience distanced and seated on the field. You must wear a mask and bring your friends and a blanket for theatre under the stars! A small orchestra will accompany the cast of five women and five men with Jerry Jay Cranford serving as director/choreographer, Paul Hunt as musical director, Amy Rosine as vocal coach and Alicia Willard as rehearsal accompanist and performance keyboards. The cast features Brett Boline, Ben Chisam, Brooke Doll, Masie Dulitz, Annelise Mock, Michael Pierce, Nikèla Reed, Matthew Robison and Jackson Welsh.

The four pieces being represented:

• "INN-DEPENDENT," book, music and lyrics by Blake Cordell.
In this present-day homage to the musicals of the 40s, there are bouncy tunes, tap-dancing and the high stakes of losing a family business surrounding a boy meets boy love story. Cordell wanted to portray a world where the queer romantic core was accepted and not the battle to be fought similar to the Mickey and Judy movie musicals of yesteryear.

• "THE UNCIVIL ONES," book and lyrics by Christian Duhamel, additional book by Charissa Bertels and music by Ayomi Okada.
Three strong, independent women seek to find their place in the male-dominated society of the Civil War. High drama and a blue-grass/Appalachian-inspired score combine to explore themes of freedom, equality and intersectional feminism inspired by the historical figures Dr. Mary Elizabeth Walker, the only female to receive the Congressional Medal of Honor; Mary Jane Richards Bowser, a Union spy during the Civil War and Mary Irene (Levi) Hook, modeled on Albert DJ Cashier, a trans male who fights for the Union.

• "THE YEAR AFTER," by Tim Aumiller and Scott Schneider.
A quintet of New Yorkers confronts the realities of seeking love, losing love and enduring relationships in a time of personal and political chaos in 2017, the year after.

• "AN AMERICAN IN BEIRUT," music and lyrics by Alex Wakim, book by Chantal Bilodeau and original concept developed with Jonah Kirkhart.
It is the story of a first-generation Lebanese-American who returns to Beirut to uncover the stories of the past and explore what it means to live in two different cultural worlds while also dealing with a budding romance. 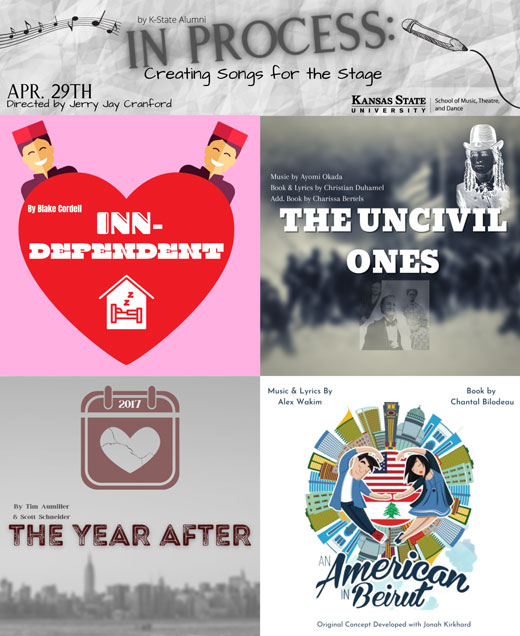