Vice President for Communications and Marketing 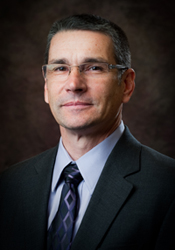 As Kansas State University's first vice president for communications and marketing, Jeffery B. Morris has instituted a successful, award-winning integrated marketing strategy for the university.

Morris oversees the Division of Communications and Marketing, which provides marketing, design, news, social media, photography, video and Web services to all of the university's campuses and for the university's key initiatives such as K-State 2025. He also works closely with major units associated with the university, including the K-State Alumni Association, KSU Foundation, K-State Athletics, K-State Research and Extension and university licensing.

Under Morris' leadership, the division has increased the effect, efficiency and consistency of institutional communications and marketing initiatives. This includes enhancing and growing the university's national branding efforts; redesigning the university's home page; combining key news and communications units under one roof; creating tools and templates to support branding efforts for eNewsletters, digital signage, PowerPoints and other forms of communication; starting K-State Today, the daily e-newsletter for internal communications; launching K-State Video News, which has expanding the media coverage and overall exposure of the university nationally; and more.

For these efforts, the university has been recognized by the Council for the Advancement and Support of Education, or CASE, with numerous awards and sweepstakes honors for excellence in all forms of communication, including CASE's 2015 Silver Circle of Excellence Award for K-State Video News.

Morris also received the 2013 Wildcat Pride Award, which recognizes K-State faculty or staff who have been instrumental in advancing the mission of the K-State Alumni Association through the support of its programs.

A K-State alum, Morris became vice president for communications and marketing in February 2010. He brings experience in both the private sector and public higher education to the job.

Morris served as chief communications officer for the University of Central Missouri from 2003-2009. He led efforts to rename and reposition university, serving as a key member of the name change team. He reorganized his office to support integrated brand strategy across all media platforms, eventually assimilating printing services, broadcasting services and Web services. He also led efforts to develop a unified social media strategy across campus units. The institutional branding campaign his team created won a national Gold Medal for best Institutionwide Branding Program from CASE in 2007, the same year the university's licensing program was named No. 1 in the nation.

He has expertise in branding, research, direct marketing, interactive marketing and public relations. He began his career with the Dodge City Daily Globe as a reporter and news editor. He also worked for Kansas Gas & Electric Co. in Wichita as a communications specialist and publications editor.

Morris is a 1980 K-State graduate with a degree in journalism and mass communications. He earned a master's degree in marketing communications in 2000 from the University of Kansas.