Department of Biochemistry and Molecular Biophysics

Made possible by a generous endowment provided by Dr. and Mrs. Hageman and hosted by the Kansas State University Department of Biochemistry. 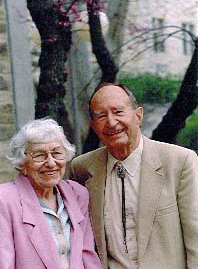 Richard Harry Hageman grew up in Washington County, Kansas. He obtained his B.S. in Chemistry at K-State and an M.S. at Oklahoma State. Following his experience as a research chemist at experiment stations in Kentucky and Puerto Rico, interrupted by 4 years in the army chemical corps, he returned to graduate school and obtained the Ph. D from the University of California at Berkeley, with D.I. Arnon in 1954. He rose through the ranks at the University of Illinois and in 1984 became Professor Emeritus.

When Richard Hageman was nominated for the first Hoagland award it was pointed out that his distinct contribution was "his formulation, early in his career, that rate-limiting enzymes could be identified and used as a basis to select for specific traits which lead to higher crop yields. This singular focus, which resulted from and contributed to his research on nitrate reductase, is so basic and now so readily understood that it is taken for granted in all of plant science." His major contributions to understanding of plant nitrogen metabolism included the finding that nitrate reductase is an inducible enzyme, and identification of nitrite reductase as a distinct enzyme dependent on ferredoxin in chloroplasts.

Elizabeth C. Hageman obtained her B.S. and M.S. degrees at Oklahoma State University. She worked for many years in biochemistry with distinguished scientists including C.H. Li at Berkeley, and G. Hanson and W. Ogren at Illinois. With Professor Hanson, she was involved in pioneering work on in vitro culture of bovine mammary gland tissue.

Richard H. and Elizabeth C. Hageman were married for more than 61 years, until his death in December 2002. They have three children and a baker's dozen of grandchildren.