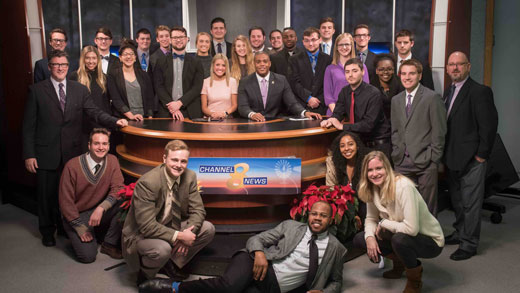 Students from the A.Q. Miller School of Journalism and Mass Communications at Kansas State University, including members of the Channel 8 News team, won top honors in this year's Kansas Association of Broadcasters student competition. Awards include the best college newscast in the state for the 2017-2018 awards season. The newscast that won the award focused on coverage of the KSUnite event in November of 2017.

"These awards show the outstanding accomplishments of students in the A.Q. Miller School," said Jean Folkerts, interim director of the A.Q. Miller School. "They are a testimony to the innovative leadership in the broadcast and digital media aspects of the program. Students who work on the live KKSU-TV program and at KSDB-FM, as well as many volunteers who participate in the program, either through classwork or practicums, are in demand in the workforce and can look forward to even greater accomplishments after graduation."

"To be honored as the top newscast in the state is a testament to the effort and journalism work the students have put in both individually and as a team," said Andrew Smith, multimedia news director and professor in the A.Q. Miller School. "While this is a learning environment, the students are creating work that truly affects those in our viewing area, both on and off campus."

Entries were taken from broadcasts of Channel 8 News and MHK All-Day, as well as promotional materials created in partnership with local businesses. Members of KAB judge entries for excellence, creativity, believability and effectiveness. Criteria include theme, phrasing, salesmanship, technical, opening and closing.

The following are the honorees in the Undergraduate/TV competition: