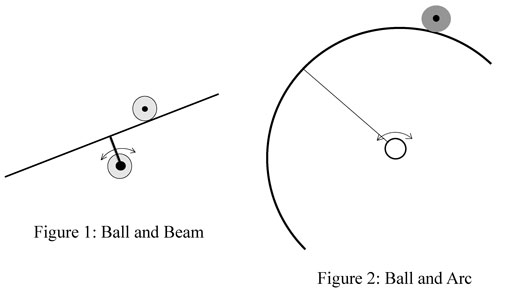 The goal of the ball and beam system, as shown in Figure 1, and the ball and arc system, seen in Figure 2, is to rotate the beam so that the ball remains balanced above the point of rotation.

"Automatic control theory is used to make mechanical systems perform in a desired fashion, such as making a robot arm follow a particular path as it welds," White said.

To do this, dynamic equations for motion are used.

"Dynamic equations, which are based on Isaac Newton's laws of motion, govern the way in which a mechanical system responds to a given force application such as an accelerating car or a robot arm lifting an assembly," Lare said.

White said that the ball and beam system as well as the ball and arc are examples of underactuated mechanical systems.

"Think of a robot where some of the joints do not have motors; that's underactuation," Lare said.

"An important part of underactuated systems is rocket guidance and control where the rocket is balanced atop the thrusters — picture the Saturn 5 coming off the launch pad," White said.

Lare, Hossian and White were using dynamic equations — one first presented in 1991 and used frequently by other researchers — for work with a ball and beam system. They discovered a flaw in the mathematical model.

The researchers said finding the errors are significant for both teaching and research.

"As academics, if we do not observe the fundamentals, who will?" White asked.

"We cannot make new accomplishments unless the basis on which we build has a firm foundation," Lare said.