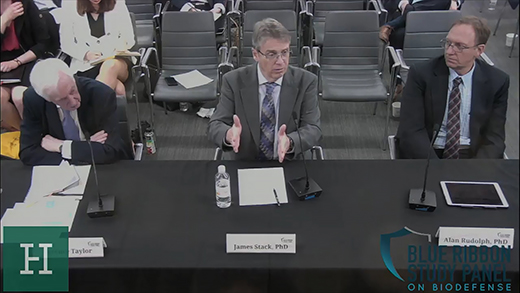 "Plant health is prerequisite to human health and well-being," Stack said. "We eat plants and we feed plants to the animals that we eat."

Stack described how global trade has been identified as a vehicle to enhance the economy, resolve poverty in developing nations and achieve global food security. But he also described how border inspections and prevention measures — although important — are insufficient to deal with the magnitude of introductions of new organisms and pathogens associated with global trade.

He provided details of the consequences of the 2016 wheat blast outbreak in Bangladesh and the 2017 outbreak in India. Early and accurate identification of plant pathogens is key to effectively responding to disease outbreaks and to preventing further outbreaks, Stack said, and it is important to fund research programs that improve diagnostics.

"We have embraced and are reaping the many benefits from the global economy, and we need to accept the responsibility for the consequences of that global economy," Stack said. "We need to build and maintain plant food systems with the ability to keep pace with transnational biological threats. The implications for global security with an expanding population are significant."

Watch the panel discussion at ustream.tv/recorded/114480083.