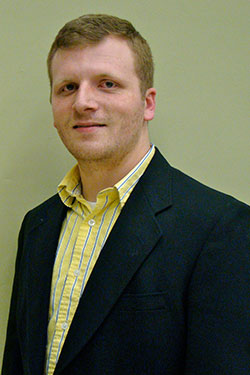 Ben Worcester holds a Master of Music Composition/Theory from Kansas State University (2010), a Bachelor of Music Education from K-State (2006), and a Bachelor of Science in Bible from Manhattan Christian College (2006).

During his time at Kansas State, several ensembles and chamber groups have performed Ben’s works. Statements for 6 trumpets was performed by the
K-State Trumpet Ensemble at the 2009 International Trumpet Guild Conference. Whither No One Knows (for a modified Pierrot Lunaire ensemble) was selected for performance for the Society of Composers, Inc., Region VI Conference in 2010. The KSU Symphony Orchestra commissioned Ben’s arrangement of Chestnuts Roasting on an Open Fire and Three Scottish Folk Songs for orchestra and men’s chorus.