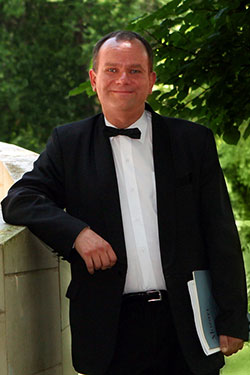 He is a graduate of the Chopin Academy of Music in Warsaw, Poland, and the University of Connecticut. In 1993, he won the Naftzger Young Artist Award and was the Naftzger Piano Division Winner. Prior to his appointment at K-State, Dr. Dobrzański was a member of music faculties at Concordia College in Moorhead, MN and the University of Rhode Island.

As a soloist and chamber musician, Dr. Dobrzański often performs in Asia, Europe, South America, and throughout the United States and Canada.

Dr. Dobrzański 's former piano students are currently pursuing artistic and academic careers all over the world, across North and South America, Africa, Europe, and Asia. Many have become highly successful soloists and chamber musicians, often while serving simultaneously on the music faculties of colleges, music conservatories, and community music schools.

Dr. Dobrzański is the recipient of the 2021 Outstanding Teacher Award from Kansas Music Teachers Association.