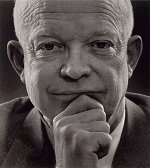 The Eisenhower Lecture in War and Peace is a biennial event hosted by the Kansas State University Department of History. Internationally acclaimed historians are invited to speak on an issue of war and peace in their field of specialization. Lecturers are also invited to lecture specific undergraduate classes as well as lead graduate seminars and interact with graduate students. Department faculty, staff, graduate and undergraduate students as well as supporters of the Department of History are also invited to attend a special banquet with the guest lecturer and participate in an informal post-lecture question and answer session with the guest speaker.

The opinions and interpretations presented in these lectures are solely those of the author and do not necessarily represent those of Kansas State University and/or the Department of History. All of the Eisenhower Lectures in War and Peace are protected by copyright and may not be reproduced without the express written permission of the Kansas State University Department of History.