Gloria Freeland, professor emeritus in the A.Q. Miller School of Journalism and Mass Communications, and her husband, Art Vaughan, recently published their book, "An Opportunity to be Better," about the sister-city relationship between Morganville, Kansas, and Fèves, France.

The couple began researching the story after students in Freeland's spring 2013 News and Feature Writing class at Kansas State University wrote a story about Morganville's aid to its French sister following World War II. Freeland and her students worked with K-State's Chapman Center for Rural Studies and Cathy Haney, the late Clay County Historical Society museum director, who preserved notebooks, photos, Morganville Tribune articles and other documents related to the connection between the two villages.

Freeland and Vaughan also used the Carson family collection at K-State’s Richard L. D. and Marjorie J. Morse Department of Special Collections during their research. Much of that collection was donated by Gould Colman, Velma Carson’s son-in-law.

Carson, a Morganville native who received her K-State journalism and mass communications degree later in life, wrote the 4,500-word play, "Message to Fèves," that was performed in August 1948 in Morganville. She and other Morganville community members organized efforts to raise money and send clothing, seeds and other items to their French sister in the late 1940s and early 1950s. Their work brought worldwide attention to the rural Kansas community and its French sister.

Through his research, Vaughan found people in Féves who remembered the story, and he and active members of the Féves city council have been instrumental in reconnecting the two villages.

Freeland and Vaughan have traveled to France seven times to interview those who remember receiving the aid and to do additional research.

Visitors from Fèves traveled to Morganville in late December 2013, and 20 citizens from France visited in September 2015. Morganville Mayor Brent Rundell and his wife, Charlotte, accompanied Freeland and Vaughan to Fèves in September 2016, and former Morganville native Jay Mellies and Carson’s niece, Margretta (Flinner) Fosse, and her son, Ben, were part of a group that visited in June 2019.

"It has taken a long time to finish this book, but it has definitely been a labor of love," Freeland said.

Vaughan agreed and added, "Our purpose all along has been to preserve the story for future generations."

Books are available through the Morganville-Fèves website at www.morganvillefeves.org. The Clay County Historical Society Museum also has a limited number of books.

The couple is working on a French version of the book, which will be available in 2021. Friends in France are helping with the translation. 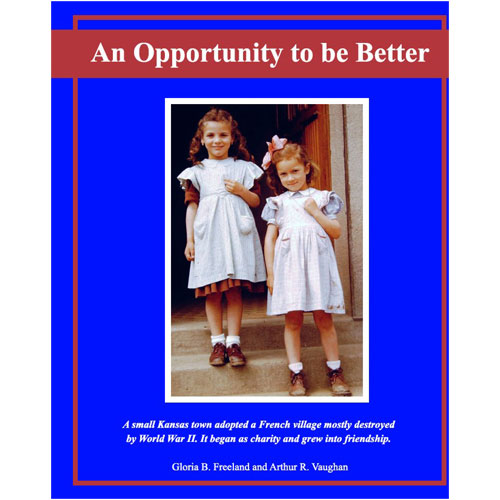