Partnerships for International Research and Education

Partnerships for International Research and Education(PIRE)

Welcome to the PIRE Program

These are high temperature silicon-based covalent ceramics obtained from thermal decomposition (or pyrolysis) of certain organo-silicon polymers. These ceramics are known for their nano-domain structure that remains amorphous up to very high temperatures (>1200 degree C). 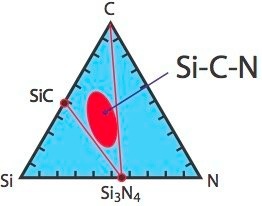 As ceramics frequently have much higher melting points than metals, ceramics hold the promise of "super" turbines. There are principally two kinds of structural ceramics: oxides, such as aluminum oxide (i.e., sapphire) or non-oxides, such as silicon carbide (SiC). Oxides generally have a much higher coefficient of thermal expansion than the carbides, which renders them prone to thermal shock, but oxides have better oxidation resistance than the carbides.

Currently, commercially available non-oxide ceramic fibers, which can be used in CMC components for hot sections of gas turbines, are constituted from SiC (developed in the 1970s) and are available only from Japan. Basic (and applied) research on next generation multi-component polymer-derived ceramic fibers at Universities is conducted nearly entirely in Japan, Germany, France and Italy. There is little research activity at US universities. In the United States, only Air Force and NASA have small-scale programs to study the high temperature properties of ceramic fibers.

We face a shortage of graduate students trained in this area at American Universities, who have strong links with their international counterparts. Therefore, we use PIRE to develop an essential, mutually beneficial international consortium for ceramic fiber research that builds upon the on-going activities in Japan, Italy, Germany, and France. International partners benefit from US expertise in materials science of multi-component PDC systems while non-US partners bring experience in chemistry and processing knowledge to the program.