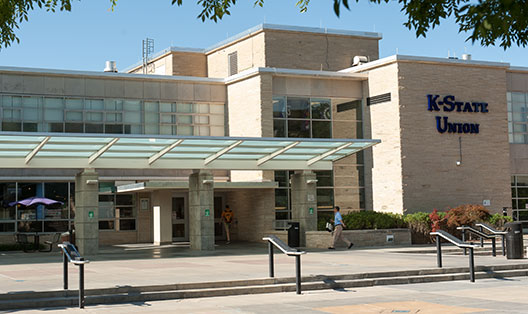 The hub of student life on campus, the K-State Studen Union houses numerous student organization offices, convenient retail and dining options, and even a bowling alley.

With an estimated 12,000 visitors per day, the Union has long been an integral part of the campus social scene. The Union Program Council organizes hundreds of social and educational events each year, including recently released movies.

The original Union opened in 1956 after students voted almost two decades earlier to pay $5 per semester to cover construction costs. Students again voted in 1995 to pay $11.4 million for a five-year project including building renovation and expansion. The project also involved construction of the adjacent Bosco Student Plaza, named in honor of Pat Bosco, vice president for student life/dean of students.

The student body voted on and approved a $25 million referendum to renovate the Union in 2013. 3,351 votes were cast with 74.9% in favor of renovating the Union. Construction began in fall of 2015 and is slated to be complete in spring of 2017.