The collaborating institutions in this project are recognized worldwide as leading research centers for wheat breeding and genetics and for international development. They have developed synergist and strong collaborative ties that will be further strengthened through this project. Collectively, this project joins together world-renowned scientists in wheat breeding and genetics who have the ability to apply both proven and innovative breeding methodologies for wheat improvement in the developing country context. 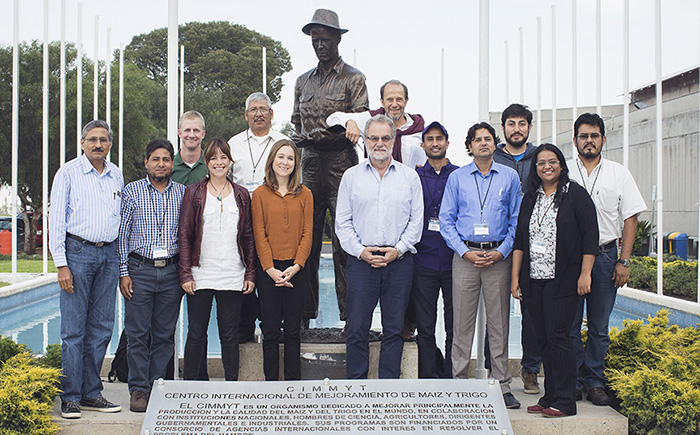 KSU is a leading research university with a worldwide reputation in wheat genetics and germplasm improvement. Over 20 principle investigators working on wheat research are located on the KSU campus including scientists from KSU, USDA-ARS, and industry. This concentration of leading scientists in wheat research brings vibrant interactions and collaborations to rapidly advance projects through a range of expertise and resources. The expertise at KSU ranges from applied breeding, to grain quality and baking, genomics, pathology, agronomy, bioinformatics, and molecular biology. The Wheat Genetics Resource Center (WGRC) is housed on the KSU campus. The WGRC is a leading center in exotic germplasm resources and utilization. Multiple research labs are equipped with state-of-the-art equipment, including liquid handling robots, automated DNA extraction, and next-generation sequencing capacity enable rapid handling and analysis of samples.

CIMMYT is a leader in producing new wheat germplasm and candidate wheat varieties for developing countries. An estimated 80 percent of spring bread wheat in developing countries is planted to varieties that originate from the Mexico-based shuttle breeding program, either as direct releases or as lines derived from crosses with CIMMYT germplasm. About half of the new wheat varieties released annually in South Asia are derived directly from the improved germplasm distributed by CIMMYT and CIMMYT wheat germplasm is often one of the parents of the other half of the varieties. Candidate varieties emerge from CIMMYT’s shuttle on an annual basis in the form of new entries in its International Wheat Improvement Network. Demand for new cohorts of candidate varieties continues to be strong, with CIMMYT distributing over 500,000 envelopes of wheat seed at the request of 83 countries in 2012 alone.

CIMMYT has scientific staff posted to all of the wheat producing countries of South Asia. CIMMYT leads the International Wheat Yield Consortium and is a member of the International Triticeae Mapping Initiative. With the establishment of the Borlaug Institute for South Asia, CIMMYT has deepened its already strong roots with public and private institutions in the target region. CIMMYT co-leads the new Global Alliance for wheat under the CGIAR, where heat tolerance is among the priority objectives (www.wheat.org). In addition to core support from USAID, CIMMYT has had many special projects with USAID, including the Cereal Systems Initiative for South Asia, CSISA. CIMMYT recently re-opened its Pakistan office and is managing a consortium of 11organizations from all provinces under the umbrella of the USDA-ARS Wheat Productivity Enhancement Program. CIMMYT is also leading the new, $30 million Pakistan Agricultural Innovations program.

CIMMYT has the mandate to improve global wheat germplasm that remains in public domain and can be utilized worldwide for enhancing productivity and diversity for a range of traits including heat tolerance. CIMMYT has a strong International Wheat Improvement Network, initiated by Dr. Norman E. Borlaug in the 1960s, which has successfully enhanced wheat productivity in many countries including South Asia. About half of the new wheat varieties released annually in South Asia are derived directly from the improved germplasm distributed by CIMMYT and CIMMYT wheat germplasm is often one of the parents of the other half of the varieties.

In 2011, CIMMYT signed an agreement with the Government of India for the establishment of the Borlaug Institute for South Asia (BISA) and one of the main objectives is to develop more productive, climate resilient wheat varieties for South Asia. Two of the three BISA research stations are located in heat stressed environments of Central India and eastern Indo Gangetic plains, and one in the highly productive area of northwestern Punjab in the northwestern Gangetic plains.

Cornell is recognized around the world for innovative plant breeding research. Cornell is the only Ivy League university that is also a Land Grant university and, thus, brings a unique combination of basic and applied sciences to this project. This project will also benefit from a strong International Agricultural Research program led by Dr. Ronnie Coffman. Cornell is unparalleled in terms of the international breadth of its agricultural programs. Cornell has state-of-the-art core facilities for high performance computing, sequencing, genotyping, and automated materials handling.

Ayub Agricultural Research Institute (AARI), Faisalabad is the premier institution generating technology that is acting as an engine for growth of economy of Pakistan. AARI was originated in 1962 after the bifurcation of research and education, working under the former Punjab Agricultural College and Research Institute, Lyallpur (Established in 1906). Research efforts for wheat improvement dates back to 1906 when Cereal Section was established at Faisalabad (Lyallpur), which was upgraded to the status of Wheat Research Institute (WRI), Faisalabad in 1975. WRI has a strong history of developing and releasing high yielding, disease resistant, stress tolerant varieties having good adaptability and possessing good quality traits. The varieties developed by the institute had been playing a pivotal role for increasing wheat production in the country in general and Punjab in particular. WRI research system covers almost all the research areas like Breeding, Genetics, Pathology, Agronomy, Entomology, Cereal technology, Plant relations to soil etc. Thirty-five highly qualified scientists are working at WRI. Wheat Research Institute, Faisalabad has released about sixty high yielding and disease resistant/ stress tolerant varieties. These varieties cover more than 80% of wheat area in the province. Pre-basic and basic seed of approved and candidate varieties is produced at WRI and given to Punjab Seed Corporation and Private Seed companies for seed increase and sale to farmers. About 100 experiments on different research aspects are conducted each year at WRI.

ICAR has played a pioneering role in ushering in the Green Revolution and subsequent developments in agriculture in India through its research and technology development; these efforts have enabled the country to increase the food production substantially since the 1950s, making a visible impact on the national food and nutritional security. It has also played a major role in promoting excellence in higher education in agriculture.