We specifically focus our efforts in the challenges of wheat production and climate change in S. Asia, and this project will take a logical but innovative approach in applying cutting edge genomics, physiology, and international phenotyping networks to maximize the value of wheat varieties in S. Asia.

The large and fertile Indo-Gangetic Plain encompasses most of northern and eastern India, the most populous parts of Pakistan, parts of southern Nepal and virtually all of Bangladesh. Fertile soils have led the Indo-Gangetic Plains to become one of the most populous areas on Earth; home to nearly 1 billion people. Wheat is an extremely important staple food crop throughout this region of South Asia, which accounts for 20% of global wheat production. Wheat in Indo-Gangetic Plain is grown under diverse environments with a rotation between wheat and rice being common throughout the area.

Due to the high population density and subsistence farming practices, this region represents a very critical area for global food security. The compounding effects of increasing demand for food from growing populations and unfavorable growing conditions from climate change pose a serious threat to wheat production and food security for South Asia. As a result of growing populations, demand for wheat is growing at an annual rate of about 1.7%. Wheat yields are growing at about 1% annually; however, this is not keeping pace with the increasing demands. The increased demand is leading to market volatility and increased prices, which has a greater relative impact on the poor and food insecure.

Given the great importance of wheat production and consumption as a staple food crop in S. Asia, measures must be taken to address the need for increased and stable production in the face of land loss and increasingly unfavorable climatic conditions. Innovative strategies that increase the rate of delivery for improved wheat cultivars with superior yield potential under supra-optimal conditions are needed. At the same time, such improved varieties must have favorable end-use quality and be preferred by male and female farmers and consumers. Development and delivery of such varieties has the potential to increase food security and on-farm income rather that the expected decrease due to the confounding effects of climate change and increasing populations. 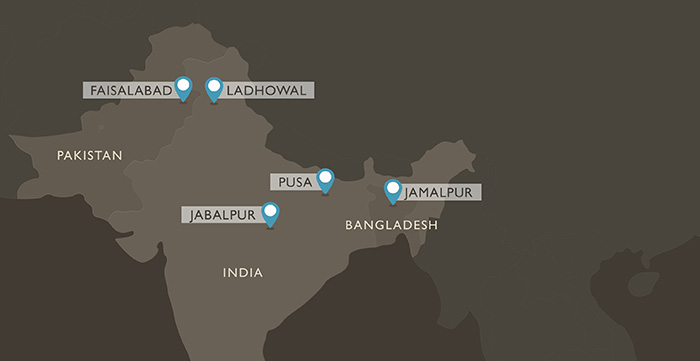