The Feed the Future Innovation Lab for Applied Wheat Genomics was established on July 18, 2013 through a $5 million grant from the U.S. Agency for International Development, or USAID.

Globally, wheat production is increasing at a rate of 1% annually, but there is evidence of yield stagnation in several regions, including S. Asia. Furthermore, climate models predict that in tropical and sub-tropical regions such as S. Asia, yields will decrease by 10% for every one degree rise in temperature. Given current cultivars and production practices, this would likely reduce production levels by 30% in these regions. S. Asia's wheat crop is particularly sensitive to higher temperatures because its thermal environments are already hotter than is optimal for wheat growth. Without intervention, S. Asia will experience lower production levels, and will be unable to meet the growing demand for wheat in the region. 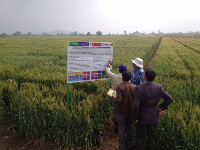 The CGIAR research program for wheat (“WHEAT”) has established a target to increase yields by 2% annually, via plant breeding and crop management, to meet the expected increases in demand from population growth and changing consumption patterns. Scientists at the International Maize and Wheat Improvement Center (CIMMYT) have established a conceptual framework identifying the physiological traits limiting wheat performance under heat stress, and have developed instruction manuals for measuring such traits (phenotyping). Some resilience to increased temperatures can arise from conventional breeding of these varieties so that they mature earlier and escape extreme heat. However, in many cases, increased winter temperatures will render this approach ineffective and therefore, in order to increase yields under increased temperatures, plant breeders must simultaneously re-engineer wheat's thermal 'comfort zone' (i.e. increase heat tolerance), match development (phenology) to future seasons, and increase inherent yield potential.

Under the coordination from Kansas State University, this project utilizes innovative approaches to concurrently address the challenges of increased yields and improved heat tolerance. We will exploit recent developments in reduced costs of genotyping, expanded cooperative networks for research and technology, and proofs of concept underpinning genomic selection. This will allow an increase in the short- and long-term value of the existing CIMMYT breeding pipeline, via earlier and larger distributions of candidate wheat varieties from Mexico to India and Pakistan, where phenotyping and local breeding expertise will combine with consortium-generated Genomic Estimated Breeding Values (GEBVs) to improve the value of wheat in national trials, seed systems, and farmers' fields. Kansas State University, Cornell University, and USDA-ARS are at the cutting edge of genomics-assisted crop improvements and high-throughput phenotyping. CIMMYT is the largest source of candidate wheat varieties for the developing world; it oversees the world’s largest public sector wheat phenotyping network and has strong partnerships with National Agricultural Research System (NARS) programs in S. Asia and the developing world. The assembled project team is therefore uniquely qualified and positioned to meet the challenge of large scale phenotypic testing and implementation of genomic selection for international wheat improvement.