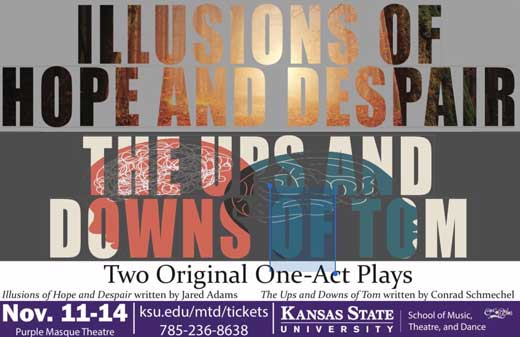 "Illusions of Hope and Despair" is an autobiographical ethnodrama based on interviews the playwright, Adams, had with his family. This play attempts to capture the complexity and complications of a family trying its best to support a member with acute Schizophrenia and aims to be a psychoeducational art piece showing the humanity in a disease that is so often seen one-dimensionally. Director Schmechel feels that the piece can "help spread awareness of these diagnoses, but can also plant seeds of inspiration, courage and deepened empathy."

K-State Theatre's Second Stage season in the Purple Masque is student-driven allowing us to feature both new and published works with student designers and directors.

"I was a little nervous when selected to direct this show, but it has been so beneficial for me," said senior theatre major Karly Breshears. "I have loved working with the cast and crew on this piece and have gained so much knowledge about theatre throughout this process."

It is an important part of preparing students for a professional career. We're thankful to return to live performances and to feature the work of the students. Join us this weekend for four performances only. More information can be found on the K-State Theatre webpage.