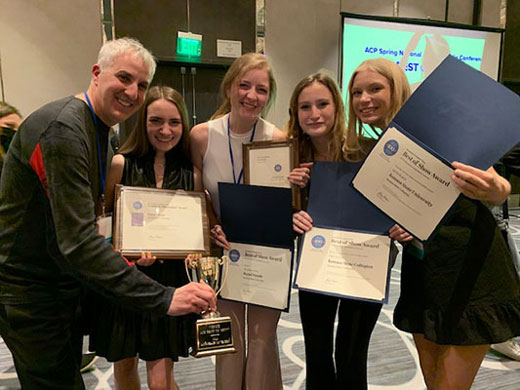 The 2021 Royal Purple yearbook wins the national Pacemaker Award for best college yearbook in the country. The Pacemaker is considered the Pulitzer of college journalism.

In fall 2021, from among entries across the country, the Associated Collegiate Press announced the 2021 Royal Purple as one of seven finalists in the competition.

The Royal Purple is a publication of the Collegian Media Group, which also publishes the Collegian student newspaper and Manhappenin' lifestyle magazine.

"Students don't need experience to get involved," said David Levy, Collegian Media Group director. "The growth in skill happens as you go. We train students along their personal path to excellence."

Co-Editor-in-Chiefs Hallie Everett and Katie Harbert led around 20 student writers, photographers, page designers and copy editors toward realizing their fullest potential. Everett, who now serves as the editor-in-chief for the 2022 yearbook, received the honor at the Associated Collegiate Press National Collegiate Press conference in Long Beach, California, on March 5. It's the first in-person conference in two years because of the pandemic.

"The honor of receiving a Pacemaker is always special, but receiving it in person was especially memorable," Everett said. "We could not be more proud of our staff for taking on this yearbook during a challenging year."

"Winning a Pacemaker award is a testament to the hard work and talent of the Royal Purple staff and its dedication to authentically telling the stories of student life during an unprecedented time in K-State history," said John Walter, who advised the Royal Purple staff between fall 2019 through December 2021. "The students' dedication and attention to detail resulted in the best college yearbook in the nation, continuing the long legacy of award-winning work that the Royal Purple is known for."

The Collegian newspaper staff also won an award for Best News Website in the conference's Best of Show competition among universities with 10,000 students or more. Levy said the beauty is that all three Collegian Media Group publications are produced by students from all academic disciplines, not just journalism.

"No matter what your field of study, the leadership and team-building skills, awards, published work and a host of other benefits are exactly what employers and internship coordinators look for when hiring," Levy said. "I welcome everyone to join us and participate in continuing the legacy of these award-winning publications."

Students can stop by 103Kedzie Hall to learn more and get started.