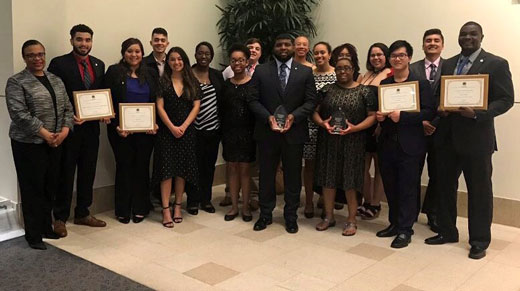 On April 3-6, the K-State College of Agriculture served as a co-host for the 34th annual Minorities in Agriculture, Natural Resources, and Related Sciences, or MANRRS, National Conference in Overland Park. A total of 1,200 participants and more than 85 companies participated in the conference.

The K-State delegation included 16 students, along with advisor Zelia Wiley, assistant dean and director of the College of Agriculture Diversity Programs Office, and Lonnie Hobbs Jr., co-advisor. Tiffany Carter, graduate student in agronomy, and Hobbs represented K-State on the national level, serving as national graduate student president and Region IV graduate vice president respectively. The students participated in various workshop sessions, the career fair and student competitions. The students were very successful in their competitions as they placed in the top three in all competitions that they competed. Student winners are listed below.

Other K-State College of Agriculture administrators participated in the conference during the career fair and various sessions during the four day period. Ernie Minton, interim dean of the college, served as a panelist during the Diversity Summit. Shannon Washburn, assistant dean of academic programs, participated in the career fair. Wiley also was heavily involved in the conference as she lead various sessions and passed her crown as the MANRRS Legend, 2017-2019, to the 2019-2021 recipient, Carl Butler.

On April 4, 40 students from the MANRRS National Conference visited the K-State Manhattan campus to tour both the College of Agriculture and College of Veterinary Medicine. Various K-State College of Agriculture administrators, ambassadors and K-State MANRRS members helped to ensure the students had a fun and informational time on campus. Thank you to Callie Rost, assistant dean for admissions, and the College of Veterinary Medicine staff for serving as co-host for the tours.

Overall, we were proud to serve as a 2019 co-host for the conference. As the MANRRS motto states, it is our duty to "change the face of agriculture by linking hands around the world." It is hoped through our efforts, this was accomplished.

Please continue to look for more diversity news and events as we continue to advertise. We appreciate your support. For more information about upcoming events or to collaborate with the College of Agriculture Diversity Programs Office, call 785-532-5793 or contact Hobbs at lhobbs@k-state.edu or Wiley at zwiley@k-state.edu.