Jose Valles and Areli Monarrez-Valles know the importance of giving back.

The married couple, both transfer students from Seward County Community College and now K-State alumni, returned to their alma mater to present the Pay It Forward Award at the Annual Developing Scholars Program Research Symposium this spring.

“We’re hoping that this program continues on,” Valles, said. “We will continue to help.”

Valles and Monarrez-Valles sponsored the Pay It Forward Award, which is a book scholarship for a student in the Developing Scholars Program (DSP).

“If you go back and think about the position we were at when we were starting and give back just a little bit, we can keep it going for the ones that are behind us,” Valles said.

The DSP was an essential support system for the couple during their years at K-State. DSP provides academic, social, and financial support for underrepresented, driven students.

“I’m a first-generation college student from my family,” Monarrez-Valles said. “It was definitely a challenge. I came in knowing nothing and left with all the knowledge in the world.”

DSP offers students the opportunity to study with faculty mentors in their fields. Valles majored in animal sciences and industry while Monarrez-Valles studied biology. Both went on to get their masters and attribute part of their success to the program.

“It was great to come back and get reconnected with all the hard work,” Monarrez-Valles said. “I see myself in [the students].”

“I think that’s what DSP is for,” she said. “Even so many years later, we still shoot for that. This taught us to always want to do more because you can.”

As the couple reflects their journey in education, they know starting at a community college helped them on several levels. Not only did they have smaller class sizes, but they also had a better understanding of how the college process works.

“Seward County gave me a defined vision of what college would be before moving to a bigger university,” Valles said.  “Seward prepared me for K-State.”

Each step of the couple’s education provided the necessary background to reach their goals. Whether it was their time at Seward or their involvement in DSP, it’s clear that the support made all the difference. It’s that support they want to extend to other students.

“This program has touched a lot of lives, and hopefully we can keep it going,” Valles said.

For Austin Barnes transferring from Johnson County Community College to K-State amplified his opportunities for a career in radio broadcast.

“At Johnson County, I just did a lot of pre-requisite course work for the JMC program,” Barnes, Bonner Springs, Kansas, and senior in journalism and mass communications, said. “So I took classes like Mass Communications in Society and some different classes that taught me the basics of news writing.”

As his interest in mass communications grew, he came across an opportunity to work with RealNetworks, Inc., an Internet streaming media provider.

“I did a program with RealNetworks where I actually helped co-host a web show—the CBS reality show Big Brother,” he said. “That helped introduce me to live performance.”

When Barnes decided to continue his education, he chose K-State as the next step.

“It was a smooth transition and everyone was super helpful,” Barnes said. “I work at Global Campus, [K-State’s distance education division], so I talk to a lot of prospective students who will actually come from different community colleges. I’m always a huge advocate for our transfer program here.”

As a journalism and mass communications major in digital media, Barnes knew it would be important to get hands-on experience in the field. At K-State he enrolled in a media practicum course that allowed him to be part of KSDB-FM, K-State’s campus radio station.

Each year the Kansas Association of Broadcasters sponsors the Excellence in Broadcasting awards for high school and college students. Radio and television broadcasts can be submitted for a chance to be recognized in the industry.

In the fall of 2014, Barnes started working on specialty entertainment shows and newscasts.

“[The station manager] submitted one certain show for the newscast that won… which was actually the first time I had ever read news for the radio station,” Barnes said.

“The specialty program that won second place was a show that we did—a Rat Pack Christmas special,” he said. “It was Frank Sinatra, Dean Martin, all those kinds of Christmas songs.”

With two KAB awards now on his resume, the December 2015 graduate will have something to help him stand out from the crowd.

When Barnes looks back on his success, there’s one piece of advice he would give transfer students.

“Get involved as quickly as possible,” he said. “My first semester here I was a little hesitant to jump in. I kind of regret that now because when I did jump in the following semester, I just fell in love with everything I was doing.” 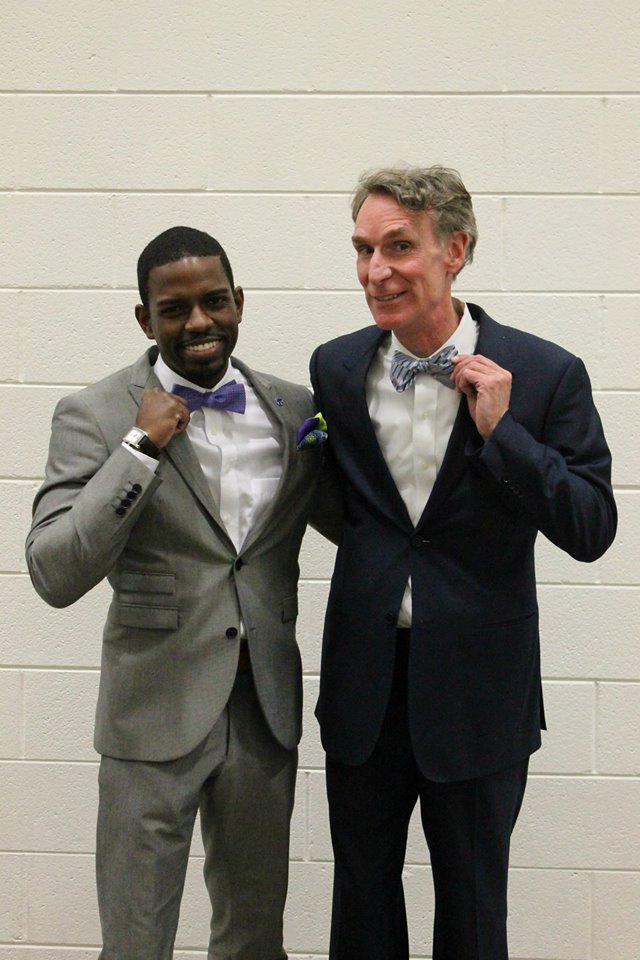 A bright bow tie and a live-wire personality might be the first features a person notices when meeting Adam Miller. Complementing his suave style is an array of educational achievements as well as many service-oriented experiences. Miller a former Metropolitan Community College and 2012 K-State alum, was recently awarded a Fulbright U.S. Student Grant.

The prestigious international award allows students to live abroad in one of 135 countries while studying or conducting research. In March of 2015, Miller will fly to Argentina where he will work as an English Teaching Assistant and fulfill yet another one of his dreams.

At the age of 27, the Overland Park native has already taught Spanish to classrooms of students, studied in Malaga, Spain for a semester, and spent over a year as a K-State admissions representative to multicultural students. Currently, he oversees 120 students as part of Kauffman Scholars Incorporated.

“My goal setting goal process is just to take things that seem out of reach, unbelievable and outlandish and just go get ’em,” Miller said.

His experiences at Metropolitan Community College in Lee’s Summit, Missouri were stepping stones in his education, boosting him closer to achieving his dreams.

“I did that for two years and knocked out most of my prerequisite courses and then went on to K-State,” he said.

Sometimes transfer students may feel overlooked or undervalued when they transition to a new educational environment. Miller said it is important to get involved early to make the most of the college experience.

“When I transferred in, I don’t think there were transfer ambassadors,” Miller said. “That’s helped a lot as far as getting transfer students acclimated and making them feel welcome. It was not like I never felt welcome, but I felt like I was kind of on my own for a little bit.”

Organizations such as the Transfer Ambassador Program seek to serve the unique needs of transfer students by providing comfortable transition to life at K-State. The organization gives transfer students an opportunity to become involved in campus life right away.

“A lot of [transfer] students think, ‘No, I’m coming from a community college. I can’t make it,’” Miller said. “I’m like, I’m living proof that you can.”

The proof lies in his bachelor of arts degree in Hispanic studies and master's degree in Spanish language acquisition, romance languages, literatures, and linguistics.

Although Miller completed post-graduate work, that wasn’t always his plan.

“The reason I started my master’s is funny,” Miller said. “I lost at a game of rock-paper-scissors to my mom.”

According to Miller, his mother, Marjorie, had never won against him in rock-paper-scissors.

Confident in his abilities, he agreed to make a deal with his mother.

“The deal was if I win, I get a car for graduating,” he said. However, the deal was only valid if he lost, he didn’t get a car and he had to go to graduate school.

The two played the best two out of three.

“We had one a piece. We threw the same hand seven times in a row. Finally she threw a rock, I threw scissors, and she got me.”

While pursuing his master’s right away may not have been on his radar, it opened many doors for him.

“By losing I have won. It’s the best decision of my life,” Miller said.

Losing a game of rock-paper-scissor wasn’t the only instance where Miller was not the outright winner.

“I learned Spanish for a girl when I was 15,” Miller said. “I wanted to ask her out on date, and she didn’t speak English...I didn’t get the girl, but found out I was really good at Spanish.”

In fact, it was that very story he used for the Fulbright application. As it turns out, losing may prepare you for opportunities later in life. Those opportunities may even take the form of traveling abroad.

As Miller travels to Argentina, changes will be plenty.

“I expect to be thrown out of my comfort zone and I love that; I hate being comfortable,” Miller said. “I know that sounds very strange, but I like being caught off guard. I think that’s the most beautiful part of about life. It’s so unexpected.”

He has never been to South America, and he is eager to engage with people from another country.

“I’m looking forward to meeting different people, different walks of life. It’s something that makes you appreciate your own culture, and different cultures as well.”

One way he will be immersed into a new culture is through interacting with students.

“I’m excited to get back in the classroom,” Miller said. “I love teaching. Probably one of my favorite things while I was in grad school was teaching. I didn’t think I would like it. But I loved it. I craved creating lesson plans, watching people learn.”

As part of the Fulbright program, he hopes to work on civic engagement projects. He said there are organizations for wildlife preservation, which he’s eager to join. He’s also seeking to research sociolinguistics during his stay in Argentina.

Such research would prepare him for his next dream: doctoral studies in linguistics. Eventually, Miller says he wants to put Rosetta Stone out of business.

“I have a little entrepreneurial flair,” Miller said.

No matter what the dream, where students begin, or what they want to accomplish, Miller proves dreams can be achieved.

“Work hard enough, get the right people backing you, there’s no limit to what you can do.”