How researchers are analyzing misinformation

It is easier than ever to produce and consume information — it just requires a scroll, swipe or click. Information is at our fingertips every hour of every day.

“Some studies have shown that misinformation is often more clicked on, read or engaged with than real or factual news,” said Jacob Groshek, associate professor and Ross Beach chair of emerging media research in the Kansas State University A.Q. Miller School of Journalism and Mass Communications. “There are a number of reasons — from the commercialization aspect of it to the personalization of news and information online — that have been driving us more and more toward being exposed to and perhaps influenced by misinformation.”

Researchers at Kansas State University are analyzing and exploring how communication technologies and the use of social media platforms and other digital media influence our daily lives from interpersonal communications to decision-making. 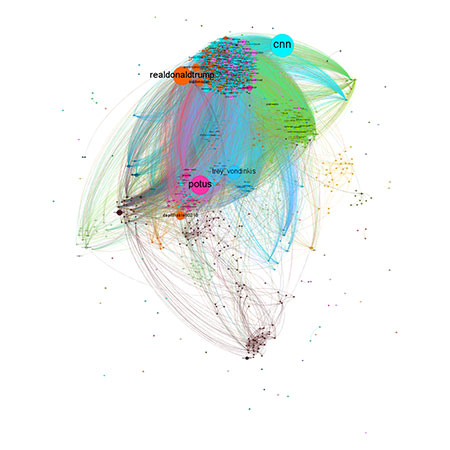 This network graph visualizes social media user influence by both human and nonhuman actors in more than 14 million tweets sent by more than 2.4 million Twitter users in 2018. Jacob Groshek, associate professor of journalism and mass communications, created this graphic.
View a larger graphic.

Groshek and his team of graduate students study how online and mobile media technologies influence decisions related to not only politics and health, but also sports and culture. This research also helps people understand how and why they are receiving specific information from their personal social media feeds and recommendation systems.

Another of Groshek’s research projects analyzed the use of the #fakenews hashtag on Twitter by modeling the top 50 accounts on the platform over a year’s time. The study determined that the sharing of information often circulated among a small number of highly influential users in order to overwhelm that system and create a cycle of perpetuating misinformation. Just as important, the majority of Twitter accounts in the study were classified as bots, or nonhuman agents posting or reposting tweets created by others.

“Whether or not you are seeing information that is from a real person, a bit of code or a combination of the two, that volume of what’s being received, interpreted and perhaps acted upon can be skewed and can make that picture look vastly different,” Groshek said. “Even the appearance of certain viewpoints being dominant can then influence the way that users think about and respond to that information.”

The study also found that fake news discussions on Twitter influenced audiences’ understanding of what is true or false and the credibility of legacy media channels.

“It is absolutely essential for citizens who are living in a media-saturated environment, particularly in online environments, to understand these flows of information and how they can be altered, adjusted and influenced by a wide variety of actors both domestically and internationally,” Groshek said. “We can truly serve the public interest by helping people work together on shared problems, which is what democracy is really all about.”

The power of memes

Memes are entertaining and give us opportunities to chuckle, but these small bits of communication can be full of powerful messaging.

Heather Suzanne Woods, assistant professor of communication studies in the College of Arts and Sciences, specializes in rhetoric and technology and is a co-author of a book about memes. Woods studies how technology and culture influence each other, and she includes meme literacy in classrooms and in workshops.

“When I teach about memes, I ask students to understand and unpack messaging inside a meme so that they can be critical thinkers and digitally literate,” Woods said. “Those skills are important for building future civic leaders and people who can participate in a democracy.”

Memes bring together cultures and communities to create something new in an engaging format. But this hyper-condensed communication does have drawbacks, Woods said.

“Memes can be on the edge of internet culture and their humorous elements mean no one really fact checks a meme,” Woods said. “The form of a meme does not lend itself to the same element of scrutiny and consideration as other forms of communication or discourse might. Misinformation or disinformation can move fairly rapidly in memetic format without people knowing that it’s happening.” 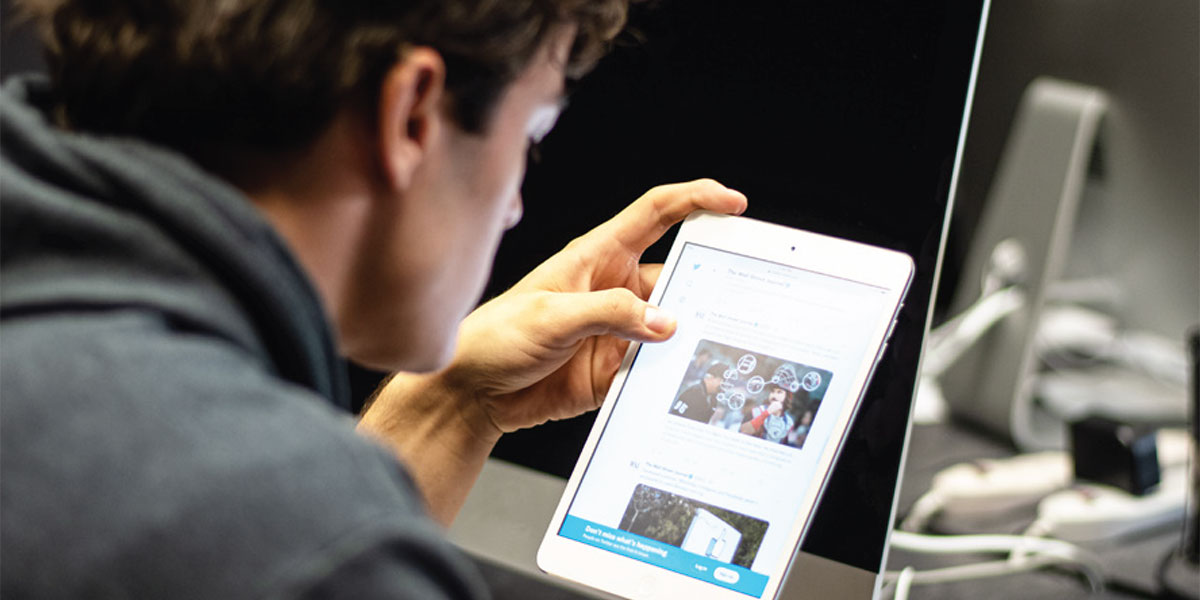 Don Saucier, university distinguished teaching scholar and professor of psychological sciences, researches prejudice and persuasion. His work helps to understand how people process information and why misinformation is sometimes difficult to overcome.

Biased assimilation is the processing of information through our own prior knowledge and beliefs so it makes sense. His research shows people take information and make it tell the story they want it to tell. This is one of the ways that misinformation sticks.

Saucier also has investigated social vigilantism — people’s tendencies to think their beliefs are superior and that others should believe what they believe for the same reasons.

“There is this motivational component that they will pay attention to information on the other side of their perspective, but they are not listening to it on its merits,” Saucier said. “They will not be persuaded.”

Saucier’s research sheds light on how information is processed and he offers strategies to interact with others during disagreeable conversations.

“Disengaging from a person high in social vigilantism might save you some time, emotional energy and aggravation,” Saucier said. “If you find someone like this, you aren’t going to change their minds. So, unless you enjoy the battle, get out of it.” 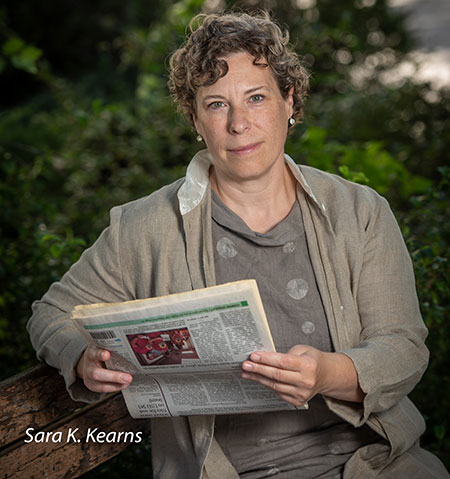 Mobile devices are today’s equivalent of a printing press and a newspaper that we carry around in our pockets. Understanding what information we are consuming and sharing is a critical step to stopping the spread of misinformation.

Kelly Glasscock, instructor of journalism and mass communications and executive director of the Journalism Education Association, says misinformation seeps into our daily lives when we stop thinking critically about news and information sources.

“There’s always going to be misinformation and disinformation,” Glasscock said. “Media literacy is that protection against it. It’s a critical element to our daily lives and a skill set that everybody needs to be well versed in — to be able to identify or know when someone is trying to manipulate you.” 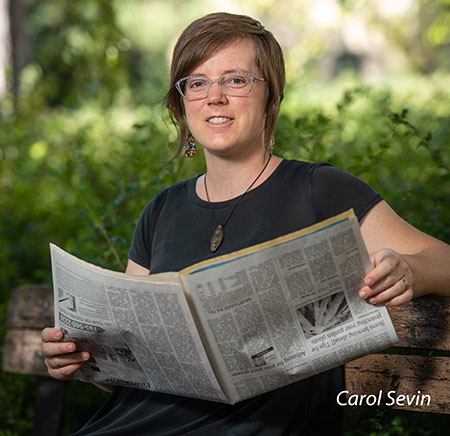 The librarians recommend starting with small steps. These small steps could be finding a local news source, recognizing that news changes over time to reflect new information learned on an issue, reading an alternative viewpoint once a week or fully reading an article before sharing. “You need to be able to evaluate news for yourself,” Kearns said. “It is very nice to have your views affirmed, but that doesn’t mean that is how everything is actually happening in the world. One of the things we have to do is take a step outside of our comfort zones and try to see what is happening from a different perspective.” 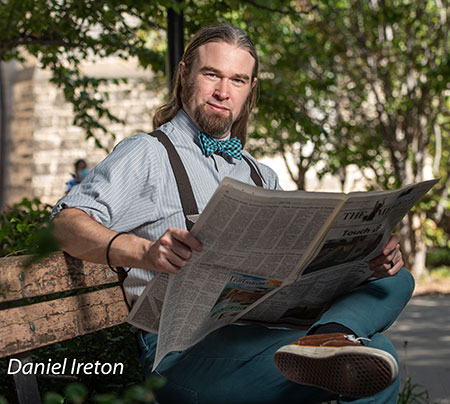 The K-State Libraries team offers the following tips to think critically about the news:

• Learn about the news cycle and good journalistic standards.
• Evaluate your current news sources to identify any bias.
• Decide if the information is fact or opinion.
• Review and change social media settings.
• Audit personal news habits.

Picture your community without a local newspaper. Where do you turn for credible local news and information?

Across the country, news deserts — communities without a newspaper or with decreased access to local news — are becoming more common. From 2004 to 2019, Kansas lost 14% of its daily and weekly newspapers, according to the U.S. News Deserts Database.

Faculty and students from the A.Q. Miller School of Journalism and Mass Communications have been conducting research and outreach to help communities find ways to fill these voids. What they discovered is that newspapers are part of the social fabric of the community.

“Newspapers have always been the central point of information to communities,” said Steve Smethers, director of the A.Q. Miller School of Journalism and Mass Communications. “You may not like the editor’s choices of news story or comment, but in the end the newspaper is an indispensable community commodity and that is why losing a community newspaper is so difficult.”

According to Smethers, replacing a community newspaper does not have a one-size-fits-all solution. In some communities, volunteer journalists have been the solution. Additionally, internet access limitations and social media create a fragmented community with no central source of local news.