Candidate sterol/lipid binding proteins in plants include transcription factors of the homeodomain family termed Class III and Class IV HD-Zip.  Proteins of this type contain a DNA-binding domain, the homeodomain (HD), as well as a leucine zipper (ZLZ or ZIP) dimerization domain, and a lipid/sterol binding domain (START). START (for StAR-related lipid transfer) domains were first discovered in mammalian steroidogenic acute regulatory protein orthologs (StARs).  The START domain has undergone substantial shuffling in evolution.  It occurs together with a pleckstrin homology (PH) domain in both humans and plants.  Its association with an F-box and WD40 domain is specific to Dictyostelium, while its configuration together with a RhoGAP domain is found only in metazoans.  The combination of START with either a kinase domain or with a homeodomain is specific to the plant kingdom. 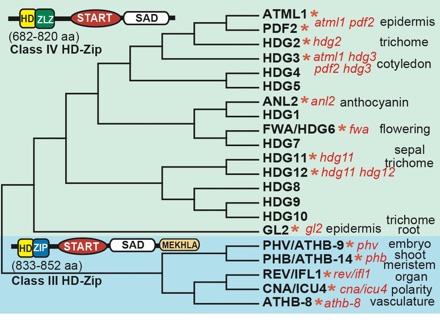 Colonization of terrestrial environments by plants ~450 million years ago required critical changes in the epidermis to protect against desiccation and solar radiation.  How can we study the molecular events underlying this transition from water to land?  Research over the past decade has established that the closest algal lineage to the land plants are the freshwater Charophycean green algae.  Using extant charophyte functional genomics models from the Zygnemetales order, Penium margaritacem and Spirogyra pratensis, we are addressing the role that HD-Zip transcription factors had in this process. 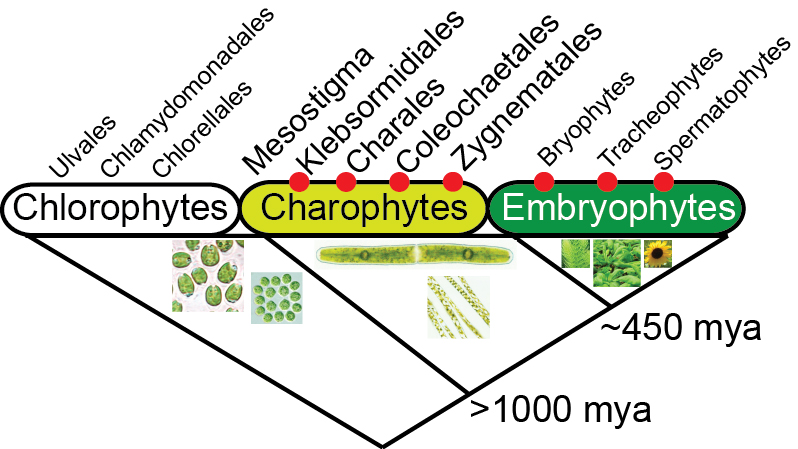 Sterols are a conserved class of lipids that play multifaceted roles in the eukaryotes, serving as structural components of cell membranes and precursors to steroid hormones.  Characterized by a hydroxy group on the C3 of the steroid nucleus, sterols represent the most abundant class of steroids.  In contrast to most animals, which contain a predominant sterol, cholesterol, plants contain a complex mixture of sterols, commonly referred to as the phytosterols.  The major sterol is typically sitosterol, followed by campesterol, stigmasterol, and various minor sterols.  Sitosterol and stigmasterol play crucial roles in cellular membranes, especially in the plasma membrane.  Campesterol is the precursor to the brassinosteroids (BRs), the only plant steroid hormones identified thus far.  Signaling roles for additional plant steroid compounds are not known thus far.

The role of sterols in plant development

Our long-term goals are to elucidate the signaling roles of sterols in plant growth and development.  Intriguingly, sterol content varies temporally and spatially in plant tissues.  Sterol production correlates with the metabolic states of cells, which in turn are exploited to regulate developmental processes such as cell differentiation. Such a mechanism would ensure a proper sequence of events in controlling cell fate decisions during plant development.

What kinds of sterols are important in plant embryogenesis?  The identification of sterol biosynthesis mutants from Arabidopsis has led to the postulate that sterols play critical roles in plant development.

The cph, fkand hyd1mutants exhibit similar pattern formation defects in the embryo and seedling such as multiple roots, cotyledons, and  meristems (See images at right).  The developmental defects are not rescued by exogenous application of BRs.  Moreover, while mutants affecting BR biosynthesis pathway show characteristic dwarf phenotypes, they do not exhibit developmental defects in the embryo.  These key observations indicate that steroid molecules in addition to BRs have roles in embryogenesis.

Below is a simplified view of the sterol biosynthesis pathway in Arabidopsis featuring 22 steroid structures and 17 enzymes. The steps catalyzed by the CPH/SMT1, FK and HYD1 enzymes are shown in red. HMG-CoA (black) is the precursor leading to sterol biosynthesis, while the BRs (blue) are synthesized downstream from campesterol. 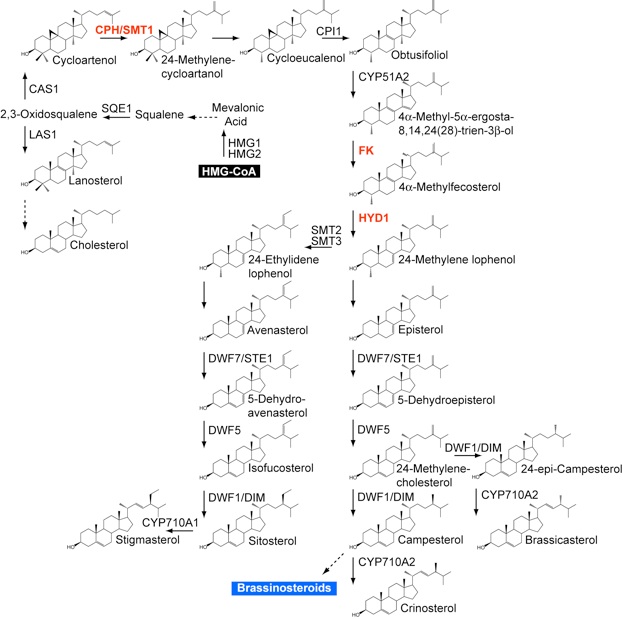 Cellulose and Sterols - What’s the connection?

In addition, sterols could play a more general role in cellulose synthesis, by virtue of their presence in the plasma membrane. Sterols are thought to be integral components of plasma membrane subdomains known as lipid rafts. Here, sterols may function in structural support lattices for integral membrane proteins, such as the enzymes that comprise the cellulose synthase machinery. We are currently studying the seed coat mucilage as a model for the role of sterols and steryl glucosides in cell wall biogenesis.