If you lined up train cars and filled them with all of the wheat harvested in Kansas during one growing season, you’d have a load stretching from western Kansas to the Atlantic Ocean. That’s 130,000 rail cars covering 1,600 miles from Goodland, Kansas, to Toms River, New Jersey.

That’s what it would take to move the 328 million bushels of grain harvested on about 7 million Kansas acres, according to the organization Kansas Wheat. The Kansas Department of Agriculture estimates that the state’s 20,000 wheat farmers provide an economic impact of $1.44 billion and more than 3,000 jobs in the state.

In Kansas, wheat really is a big deal. In fact, for most of the past century, Kansas has dominated wheat production in the United States. It may be known officially as the Sunflower State, but some know Kansas better as the Wheat State or Breadbasket of the World.

“Wheat is one of the most important staple crops around the world and is vital for food security,” said wheat geneticist Jesse Poland, associate professor of plant pathology in the Kansas State University College of Agriculture. “Kansas is a leader in wheat production, making the crop a key economic driver for the state.”

Since its founding 158 years ago, K-State has filled a major need in wheat production by providing basic and applied research for farmers in the state and world.

“K-State is a leader because we have the breadth and scope to address the gamut of disciplines relevant to wheat research — from genomics and molecular biology to breeding, pathology, agronomics and entomology, ” Poland said.

Wheat breeder Allan Fritz, professor of agronomy, has been with the university since 2000 and has witnessed firsthand the research engine that powers Kansas wheat production.

“We’re very fortunate to have some of the best wheat researchers in the world in Manhattan, including outstanding scientists at K-State and the U.S. Department of Agriculture Agricultural Research Service,” Fritz said.

“Having very talented people is a big part of being a leader in wheat research,” Fritz said. “We also have a critical mass of researchers across disciplines, creating a robust research environment. There’s strong competence here for almost anything one would want to do.”

Wheat geneticist Eduard Akhunov, professor of plant pathology, leads the International Wheat Yield Partnership’s Winter Wheat Breeding Innovation Hub, which was established at K-State in 2020 with a $1 million grant from the USDA, National Institute of Food and Agriculture. The project involves using advanced molecular techniques to find ways to stack — or combine — desirable traits into elite winter wheat varieties to improve the quality and increase the quantity of wheat produced in the world.

“We are improving wheat yield, disease resistance, quality and drought tolerance by applying modern genetics and breeding approaches that are based on big data-driven research and next-generation sequencing, functional genomics and genome-editing technologies,” Akhunov said.

“CRISPR is a powerful and extremely precise molecular tool capable of making targeted changes in genetic code,” Akhunov said. “It allows us to produce novel variants of genes that carry improved properties and create a positive impact on the traits of interest.”

Using genome editing to target genes that are linked to valuable agronomic traits allows researchers to accelerate the development of crops that produce higher yields, are more nutritious or yield higher quality grain.

“It’s not difficult to find a K-State link among the wheat research community in the U.S. and around the world,” said Aaron Harries, vice president of research and operations for Kansas Wheat, a cooperative between the Kansas Wheat Commission and the Kansas Association of Wheat Growers. “The base knowledge gleaned from wheat genetics research at K-State is disseminated nationally and globally. And, the next generation of wheat scientists is being developed at K-State.”

Barbara Valent, university distinguished professor of plant pathology, has worked on understanding blast disease for more than 40 years. In the last decade, her work has focused on wheat blast, a dangerous disease in which the fungus is capable of taking out entire wheat fields.

The wheat-adapted blast pathogen has never been found in the U.S., and Valent hopes to keep it that way. It has devastated farm fields in South America and Bangladesh, where farmers have burned entire fields to stem the spread. Despite those drastic measures, the disease still established.

“My lab has focused on knowing the enemy in order to control it,” said Valent, who in 2020 became the first K-State scientist to earn membership in the prestigious National Academy of Sciences for research conducted while at the university.

Valent’s research focuses on understanding how the destructive blast fungus infects rice and mutates so easily.

“A decade ago, I saw the opportunity to leverage knowledge my lab had gained studying rice blast to protect wheat crops from the new emerging blast disease, caused by a related fungal variant that appeared in Brazil in 1985,” Valent said.

Through work in the K-State Biosecurity Research Institute, Valent’s research team was the first to discover a resistance gene called 2NS for wheat blast disease. More recently, the scientists completed work showing how microbial pathogens like the wheat blast fungus are constantly evolving to overcome control measures developed by scientists.

“Research to solve emerging problems takes time, so we need to anticipate problems and work to solve them before they become an issue for farmers,” Valent said. “That is what we are doing with wheat blast disease.” 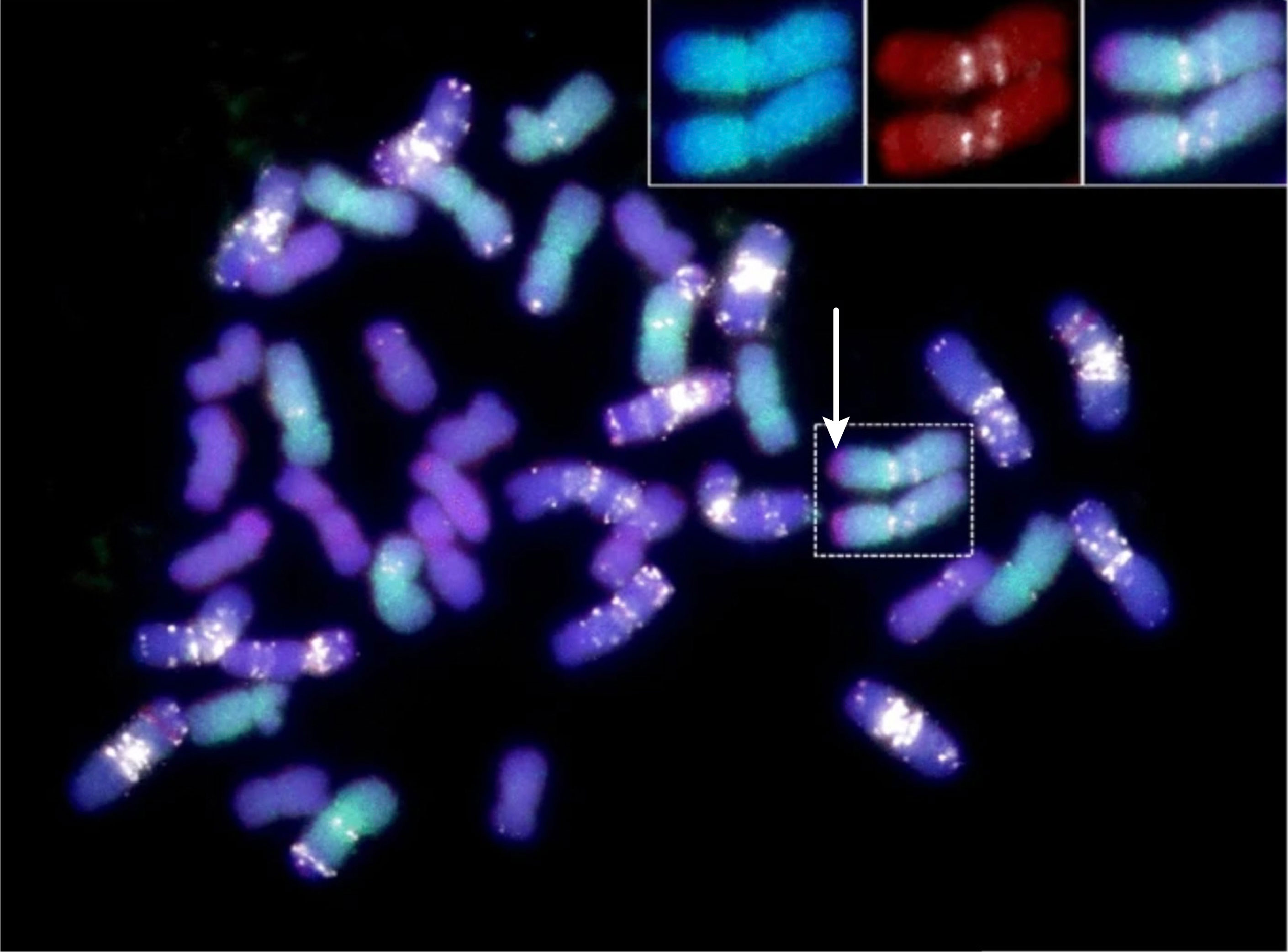 A chromosome segment from Aegilops ventricosa, highlighted by the white arrow, is found in the Kansas wheat variety Jagger. This segment carries important genes for pest and disease resistance and is associated with increasing grain yield. (Image credit: Dal-Hoe Koo) This image appeared in the journal Theoretical and Applied Genetics.

In the Feed the Future Innovation Lab for Applied Wheat Genomics, housed at K-State, researchers are creating genomics resources and tools to improve wheat germplasm, which in turn helps breeders produce better varieties.

“We look at the most significant challenges facing Kansas growers and prioritize the most economically significant issues,” said Poland, who is the lab’s director. “Our overall aim is a stable and profitable yield for farmers.”

In late 2020, Poland’s team, in collaboration with the international 10+ Genome Project led by the University of Saskatchewan, completed genome sequencing of 15 wheat varieties that represent breeding programs around the world. That came on the heels of work completed in 2018 when K-State collaborated with the International Wheat Genome Sequencing Consortium to publish the first complete reference genome of bread wheat.

Both breakthroughs are big news for wheat production around the world.

“Many of the challenges facing wheat in Kansas are not that different from the challenges all over the world,” Poland said. “It may be a different pest or disease, but the approach, resources and tools developed in our research can be used to address multiple problems.”

Mary Guttieri, a scientist with the USDA Agricultural Research Service, or ARS, Hard Winter Wheat Genetics Research Unit in Manhattan, appreciates the teamwork among her program and many other wheat researchers.

“The active engagement of the K-State wheat research and extension communities with our ARS efforts — and the work of the wheat community across the country — serves to strengthen all facets of the science of wheat,” she said. “K-State has been instrumental to the success of these initiatives to understand and utilize the complex genetics of wheat.”

Guttieri and colleague Robert Bowden — both K-State adjunct faculty members — were recognized in 2020 as part of a national team that earned the Gene Stewardship Award, given by the Borlaug Global Rust Initiative.

“We’re proud to be part of the larger K-State team and the bigger USDA team and even the much bigger global team that is doing this work,” Bowden said. “Everybody is working together wonderfully and it’s inspiring.”

Open Access This article is licensed under a Creative Commons Attribution 4.0 International License, which permits use, sharing, adaptation, distribution and reproduction in any medium or format, as long as you give appropriate credit to the original author(s) and the source, provide a link to the Creative Commons licence, and indicate if changes were made. The images or other third party material in this article are included in the article's Creative Commons licence, unless indicated otherwise in a credit line to the material. If material is not included in the article's Creative Commons licence and your intended use is not permitted by statutory regulation or exceeds the permitted use, you will need to obtain permission directly from the copyright holder. To view a copy of this licence, visit http://creativecommons.org/licenses/by/4.0/.