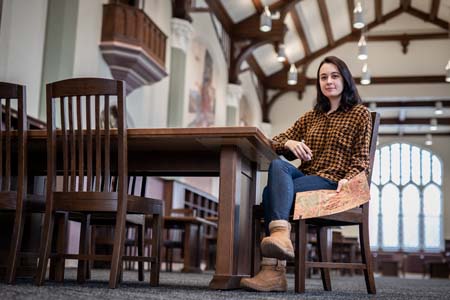 Delving into the quality of life for Spanish women in the early 20th century calls on all facets of Anna Welsh’s triple major of art, psychological sciences and Spanish. Welsh is researching and creating a visual interpretation of a recently rediscovered Spanish novel.

Welsh, senior in Kansas State University’s College of Arts and Sciences, is using a research grant from the Office of Undergraduate Research and Creative Inquiry for her project, “Mapas, mujeres y Madrid: del nacimiento a la muerte con las mujeres madrileñas en ‘La Rampa’ (1917) de Carmen de Burgos,” which translates to “Maps, women and Madrid: From birth to death with women of Madrid in Carmen de Burgos’ ‘The Ramp’ (1917).”

“La Rampa” is a gritty, realistic look at life in Madrid during a time of great growth in the early 20th century. The story emphasizes the lives of lower-class women from birth through death. Life is not easy for the main characters and the novel explores their decline of quality of life through the metaphor of the ramp.

“I really enjoyed reading this book,” Welsh said. “It was one of the more complete Spanish novels that I have read during my Spanish studies. I enjoyed and fully understood it like I would any other book in English.”

In her research, Welsh is exploring the correlation between age and quality of life during this time in Madrid. She is creating a narrative cartography, which is an illustrated map of specific data points. Welsh is using three broad age groups — infants/children, young adults from 20-40 years old and adults older than 40 years — and is plotting the areas of Madrid where these age groups appeared in the novel. While the book is fiction, it is based in historical facts that support Welsh’s research and examination of the novel and map of Madrid side by side.

“This is such a dream project,” Welsh said. “It’s a synthesis of all of my majors and I’ll be able to use my Spanish at a higher level than I’ve been able to do in the past.”

In fall 2020, Welsh was introduced to “La Rampa” in a 20th century Spanish literature course, “Mapping Madrid,” taught by Rebecca Bender, assistant professor of Spanish. According to Bender, Burgos’ books and books of other authors, were censored, lost or destroyed during the Francisco Franco dictatorship.

“Essentially, when the dictatorship ended in the 1970s, people started finding and rediscovering these authors and texts,” Bender said. “That’s why people today are just starting to study and do work on Carmen de Burgos. Her novels are now being published in Spain under new, modern publishing presses.”

Welsh presents her research this spring at Initials, which is the K-State modern languages departmental research symposium. Additionally, Welsh and Bender are working to publish her illustrated map in relevant locations and media outlets in Spain to share her research with a broader audience and promote Burgos’ overlooked literature.