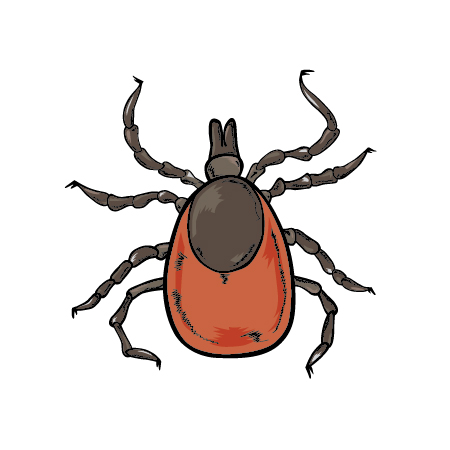 Most ticks go through four life stages. After hatching from the eggs, ticks need a blood meal from a host, such as a human or animal, at every stage to survive.

View a graphic to learn more about the tick life cycle.

Kansas State University researchers are taking on a problem that is on the uptick: tick-borne diseases.

According to the Centers for Disease Control and Prevention, tick-borne disease cases increased from 48,610 in 2016 to 59,349 in 2017 alone, but actual cases are estimated to be much higher. Eighteen tick-borne diseases that affect humans have been identified in the United States, with the most common being Lyme disease, as well as anaplasmosis, ehrlichiosis and Rocky Mountain spotted fever. Tick-borne diseases also affect animals.

Tick-borne diseases are spread through the bite of a tick infected with a pathogen. Some of these diseases can be fatal to both humans and animals if not properly treated.

To deal with the increasing number of tick-borne disease cases, the National Institutes of Health launched a strategic research plan in October 2019 that prioritizes funding and support for tools to fight tick-borne diseases, including rapid diagnostic tests, research for new treatments and vaccines, and more.

Tick-borne diseases have long been the focus of K-State researchers. Their efforts continue to garner support from the NIH, the U.S. Department of Agriculture and other public and private entities to take on these diseases in many ways.

At the K-State Center of Excellence for Vector-Borne Diseases in the College of Veterinary Medicine, Roman Ganta, center director and professor of diagnostic medicine and pathobiology, his team and affiliated scientists are on a mission to build an internationally recognized program that combats diseases from vectors, which are living organisms like ticks and mosquitoes that can transmit infectious pathogens.

Since the center was founded in 2015, Ganta has generated $9.56 million in competitive research grant support, with the majority — $8 million — coming from the NIH. The funding supports basic and applied research to develop vaccines for several tick-borne diseases that affect people, dogs and cattle, including anaplasmosis, ehrlichiosis and Rocky Mountain spotted fever.

“We work on all priorities of the NIH when it comes to tick-borne diseases,” Ganta said. “Indeed, our most recent NIH-funded grant is the result of our success in securing funding from NIH as part of its special funding initiative.”

Ganta’s most recent NIH grant seeks a vaccine for ehrlichiosis and anaplasmosis. Ehrlichiosis in people and domestic animals is caused primarily by the lone star tick. The blacklegged deer tick and brown dog tick also can spread the disease.

The disease affects domestic animals and humans and causes fever, chills and muscle aches. Anaplasmosis is caused by the blacklegged deer tick and involves many of the same symptoms as ehrlichiosis in humans, along with nausea, vomiting, diarrhea and loss of appetite. Bovine anaplasmosis is a major tick-borne disease of cattle that can be fatal and costs the cattle industry hundreds of millions of dollars annually.

Another NIH grant focuses on human monocytic ehrlichiosis, which is caused by the lone star tick transmitted pathogen Ehrlichia chaffeensis. The grant seeks to help vaccine development to control infections in humans and animals.

“We are investigating how Ehrlichia chaffeensis regulates its gene expression in response to host cell environmental signals and how it develops strategies to evade host response for its continued survival in vertebrate hosts and ticks,” Ganta said.

One of the center’s newest tick-borne disease studies is on heartwater disease, which the USDA has labeled a high-consequence foreign animal disease. It is an infectious disease of domestic and wild ruminants transmitted by a number of species of ticks in the genus Amblyomma. It has not been reported in the U.S. but is a threat for likely introduction.

“The introduction of heartwater in the U.S. could cause high morbidities and mortalities — possibly up to 80% — in domestic and wild ruminants, such as cattle, sheep, goats and deer,” Ganta said.

The center received a $400,000 grant from the state of Kansas’ National Bio and Agro-Defense Facility, or NBAF, Transition Fund to launch its initial heartwater study. Ganta expects to extend collaborations on the heartwater project with scientists at the USDA Agricultural Research Service and NBAF to develop ways to reduce the disease risk in the U.S. ruminant population. NBAF will be the nation’s foremost animal disease research facility and is nearing completion adjacent to the K-State campus.

In the lab of Kathryn Reif, work is dedicated to identifying innovative solutions to combat ticks and tickborne pathogens of medical, veterinary and agricultural importance. The collaborative research spans from basic to translational and involves several K-State researchers and graduate students.

Reif, assistant professor of diagnostic medicine and pathobiology in the College of Veterinary Medicine, is using several grants from the USDA, Food and Drug Administration and various foundations and organizations to study bovine anaplasmosis.

“We are evaluating the prevalence and genetic diversity of the agent of bovine anaplasmosis, Anaplasma marginale, in the U.S., as well as evaluating and developing anaplasmosis control strategies, including use of antimicrobials and vaccination,” Reif said.

“We are looking at the prevalence of acute and chronic cytauxzoonosis among domestic cats and identifying immunodominant antigens that can be used to develop diagnostic assays and vaccines,” Reif said.

Understanding what makes ticks tick also is a research focus. One project is adapting the technique of electropenetrography, or electrical penetration graph monitoring, to monitor the feeding behavior of ticks on their hosts. A second project is studying molecular mechanisms of tick-borne pathogens for clues on pathogen persistence and transmission.

Berlin Londoño, assistant professor of entomology in the College of Agriculture, mixes her primary research on mosquito-borne diseases with studies on tick salivary proteins. Londoño wants to develop tools to measure intensity of exposure to arthropod bites.

“Currently, there are no tools to directly measure human or animal exposure to arthropod bites that can give us a better approximation of the risk for suffering a disease transmitted by them,” Londoño said. “We are trying to develop a protocol to establish risk of infection measuring level and type of antibodies against arthropod saliva. With this protocol, we will try to track pathogen transmission and block epidemics before they get out of proportion.”

The Londoño lab has identified several mosquito and tick salivary proteins from Aedes and Anopheles mosquitoes and lone star ticks that induce significant antibody levels in humans. She and her team are measuring those antibodies to learn more about the risk of suffering a disease.

Tick-borne disease transmission in companion animals, wildlife and equine is the focus of Brian Herrin, assistant professor of diagnostic medicine and pathobiology in the College of Veterinary Medicine.

One of the projects Herrin leads is the National Equine Tick Survey of the United States, the first large-scale tick collection study from horses. Launched in 2018, the survey asks equine veterinarians and horse owners across the nation to send the ticks they find on their horses to Herrin’s lab for identification. So far, he has received more than 1,500 ticks.

“We identify the tick and report our results back to the submitter along with a short informational sheet describing the tick species and the associated pathogens that could be transmitted by it,” Herrin said. “A big portion of this study is also about horse owner education on ticks and tick-borne diseases, so we felt it was really important to engage with the community that is sending us ticks.”

Common tick-borne disease in horses include Lyme disease and anaplasmosis.

Herrin plans to collect the survey information about the various ticks infesting horses and the types of pathogens ticks they carry for future publications.

“This survey will add to the surveillance data on ticks across the U.S. as well as provide convincing evidence that ticks and their pathogens really are a major issue to the health of horses,” Herrin said. “We want to use that fact to encourage veterinary pharmaceutical companies to find more effective, longer-lasting tick control products for horses.”