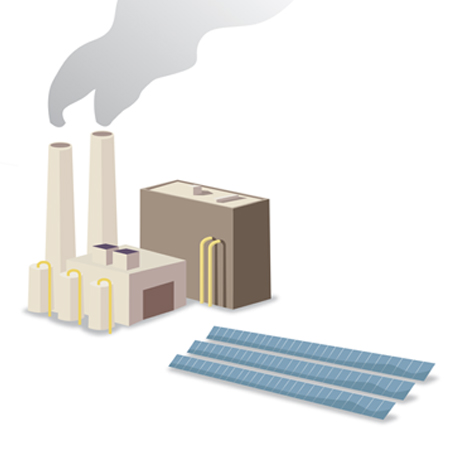 The power grid is an extensive cross-country network that generates, transmits and distributes electricity.

View a graphic that explains the steps that bring electricity to your house.

All it takes is the flip of a switch. Lights on. Lights off. But as any Kansas State University engineering researcher will tell you, it’s so much more than a simple flip of a switch. There are multiple steps for the generation, transmission and distribution of the electricity throughout the power grid to make the light switch work.

The recent surge of interest in renewable energy means the power grid, or electric grid, must adapt and modernize. Researchers from the Carl R. Ice College of Engineering are playing a key role in making the power grid smarter. Several research projects funded by the U.S. Department of Energy, the National Science Foundation, industry and other partners aim to make our electric grid smarter, more stable and more secure.

“K-State strives to be an international leader in power and energy systems and their related cyber-physical security,” said Don Gruenbacher, George J. and Alice D. Fiedler distinguished chair and head of the Mike Wiegers Department of Electrical and Computer Engineering.

“Nearly 50% of undergraduate and graduate students in our department specialize in the area of power. We have a strong history of power engineering education and research that improves the power grid.”

The power grid is an extensive network of generators — including dams, power plants, solar farms and wind farms — as well as substations and power lines that transmit and distribute electricity across the country.

Experts say the current infrastructure is dated and vulnerable to failure, blackouts and cyberattacks. Things can get complicated as we have more electric vehicles, more smart buildings and more renewable energy resources in the grid. The more devices we add, the more difficult it becomes for the current infrastructure to respond to transiency, and that can cause issues.

The solution may come from several K-State projects that are focused on modernizing our grid.

The edge of the grid

One way to modernize the grid is to make it smarter. A smart grid has situational awareness and is able to quickly respond to problems, such as vulnerabilities to hackers.

A team of K-State electrical and computer engineering researchers is using a three-year, $2.8 million grant from the U.S. Department of Energy Solar Energy Technologies Office to study how solar energy can make the power grid smarter and more resilient, particularly when it comes to cyberattacks. It is the first grant from the solar office to be awarded to a university in Kansas.

“Utility companies are definitely interested in managing this power grid evolution in a smart way and making sure that it doesn’t affect the customer,” said Bala Natarajan, the leader of the project and the Clair N. Palmer and Sara M. Palmer professor of electrical engineering. “With the power grid, there is an actual physical grid, but for it to be smart, you need a cyberphysical system on top of it to process information.”

A cyber-physical system includes a series of sensors and control components that communicate over a network and act together. Researchers on the project are developing ways to monitor the power grid so that it knows how to respond. For example, if a natural disaster would cause a power outage for 80% of the power grid, a smart grid could respond by diverting the remaining 20% of power to critical buildings, such as hospitals.

“If you look at the power grid, it’s an infrastructure that has been around for many years,” said Natarajan, also a Steve Hsu Keystone research scholar. “It has been seeing a lot of changes and it will continue to evolve, especially at the edge of the grid.”

The edge of the grid occurs at the home level where the customer interacts with the grid. It’s also where cyberattacks are most likely to occur, Natarajan said. A hacker could enter the whole power grid system through an electric car charging station or through a homeowner’s solar panel system. The risk increases as more houses and businesses incorporate sources of renewable energy.

Natarajan and the team are developing new ways of obtaining situational awareness at the grid edge. These novel methods and associated algorithms can be integrated into existing systems to monitor voltage issues across the grid, even with minimal grid edge measurements.

“In the next decade, cybersecurity issues are going to be significant,” said Hongyu Wu, assistant professor involved in the project and Michelle Munson-Serban Simu Keystone research scholar. “As we modernize our system, we have more and more communication to make the system smarter, but, on the other hand, we have larger areas that can be exploited by an attacker to do damage.”

Solar panels, electric vehicle charging stations and other distributed energy resources are dynamically changing the structure of the grid. This can be challenging when it comes to the transmission and distribution of power because voltages must be set within certain limits.

An added problem is that renewable energy is difficult to forecast. Take the Kansas weather as an example. One day it could be gusty at a wind farm and generate wind energy, but the next day could be completely calm. Similarly, several days of sunny weather for solar panels could be followed by several days of cloudy skies.

To address this issue, Wu is working on energy management of the power grid and developing ways to store and transfer the energy load on days when the weather doesn’t cooperate.

The key is to make these improvements in a cost-effective manner, which is where Mirafzal comes in. He is developing self-learning power electronic devices that can be the interface between renewable energy resources and the power grid.

It’s a green approach to incorporating green technology: Use what we already have and improve it.

The interdisciplinary project combines natural resources to benefit rural towns, farmers and ranchers. Researchers are taking three ingredients — nitrogen from the air, energy from the wind and hydrogen from water — and combining them to make ammonia. When the energy stored in the ammonia is not needed, it can become available as fertilizer in food production.

Another way to enhance the reliability and security of the existing energy infrastructure is to cluster the power grid into smart nanogrids, which can operate even when there is no utility connection.

On another project, K-State researchers are working on the concept of clustered grids by dividing the large-scale power grid into manageable, smaller nanogrids. A nanogrid could include a single building or several buildings grouped together. Each nanogrid could work independently while it communicates with other nanogrids, and these nanogrids integrated together form part of the larger network.

Such networked grids are a national priority because they are robust to natural disasters, resilient to attacks, and sustainable and affordable in an eco-friendly manner, Mirafzal said.

“Grid-based networks have a tremendous amount of potential as the infrastructure for future cities, but also for a range of other applications,” Mirafzal said. “We are looking at how we can secure the electricity and have it in important areas, such as hospitals, and how can we provide electricity without being connected to the grid to make it secure if a cyberattack or natural disaster occurs.”

Mirafzal is leading a two-year grant of more than $600,000 from the National Science Foundation Major Research Instrumentation Program to develop a test bed of nanogrids. Other researchers involved in the project include Wu; Fariba Fateh, assistant professor of electrical and computer engineering; and George Amariucai, associate professor of computer science and Michelle Munson-Serban Simu Keystone research scholar.

Mirafzal and the team are building a nanogrid test bed in Engineering Hall. This test bed and the power electronics needed to build smart nanogrids can communicate with neighborhood smart devices and identify security risks.

A wind turbine from the Meridian Way Wind Farm near Concordia

As the K-State engineers study smart grid technologies, the key to successful projects is collaboration with the companies and organizations that will use them. The university projects involve organizations such as the National Renewable Energy Laboratory, Midwest Energy, Enphase Energy Inc., Oracle America Inc. and Typhoon HIL Inc.

The National Renewable Energy Laboratory in Colorado is building a large-scale utility test bed to quantify the practicality of the university-developed technologies. Midwest Energy, an energy cooperative based in Hays, is providing real-world data so the K-State researchers can study developments related to solar energy, electric car charging and other distribution generation.

The collaboration between K-State and Midwest Energy is important to address systemwide challenges as the power grid changes from a simple delivery network to a complex network with both generating sources and loads, said Bill Dowling, vice president of engineering and energy supply at Midwest Energy.

“Midwest Energy recognizes the use of a utility’s distribution network to serve customers is undergoing fundamental changes,” Dowling said. “The introduction of distributed resources like rooftop solar and the expansion of new loads to charge electric vehicles drive the need for more detailed and continuous data from various points in the distribution network. Our collaboration with Kansas State University is important because utilities like Midwest Energy need to maintain reliable and secure control of the distribution system as it continues to evolve.”

Such university-industry collaborations are key to developing the power grid of the future, Mirafzal said.

“We want to have smarter, more power resilient and more efficient cities in the future,” Mirafzal said. “We are addressing some of the challenges that society is facing toward building these smart cities.”

Wind and the workforce

A key to smart cities is renewable energy systems, such as wind, which is one of the state’s most abundant natural resources. Kansas is No. 1 for wind energy production as a share of total electricity generation, according to the American Wind Energy Association. In 2018, wind power produced 36.4% of the state’s total electricity.

Wind power has long been a K-State priority. In 2018, the university signed a power purchase agreement with then-Westar Energy — now Evergy — to provide approximately 50% of the energy needs for the Manhattan campus from a nearby wind farm. The agreement saves the university nearly $200,000 annually.

“Wind energy is growing in the state,” said Warren White, associate professor in the Alan Levin Department of Mechanical and Nuclear Engineering. “Renewables are an emerging industry and we need an educated workforce to work in that industry.”

While White’s own research focuses on the mechanical design of wind turbines, he also focuses on preparing students to work in the Kansas wind industry through the Wildcat Wind Power team.

The competition design team includes 30 engineering students who compete annually at the Collegiate Wind Competition, which is sponsored by the U.S. Department of Energy. The K-State students are successful, too: They took third place in the 2018 competition and second place in 2017. The K-State team was chosen as one of 11 groups to participate in the 2022 competition.

For each competition, the students design, test and build a small-scale wind turbine and create a business plan for it. They also test their design with a small wind tunnel in the basement of Engineering Hall. Recently the team also has been working with College of Business Administration students on the optimal wind turbine strategies in power purchase agreements.

The experience provides K-State students with the research skills and knowledge they need for future careers, White said.

“We want to prepare a workforce for Kansas to keep people in the state once they get their degrees,” White said. “We’re trying to both stop the brain drain and also improve renewable energy in our state.”