The foundation of all K-State traditions is a solid commitment to putting others first. In 1858, Bluemont Central College, a private institution, opened in Manhattan, Kansas, and it was only a few short years later that Kansas was admitted to the Union. Nearly immediately, efforts began to establish a state university, and Bluemont Central College was converted to the Kansas State Agricultural College in 1863.

The institution that later became known as Kansas State University, or K-State, was the nation's first operational land-grant university, and the only in Kansas. This meant K-State was tasked with teaching agriculture, science, military science and engineering to any interested student, as well as seeking to better the lives of others through research and service. For more than 150 years, we have taken this obligation to heart. Whether it means making a stranger feel welcome on campus, cheering on a teammate or developing a vaccine that saves lives, we are committed to the Wildcat Way.

The inauguration of each new Kansas State University president features fanfare specific to each leader's experiences, values and vision. However, several important traditions remain steadfast with each passing president. 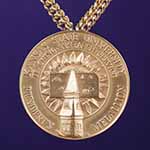 The presidential medallion was first bestowed upon the 11th president of Kansas State University, Duane C. Acker. With each succeeding university president, the medallion has served as a symbol of the Office of the President at inauguration ceremonies. 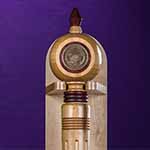 The Kansas State University mace debuted in 2009 at the inauguration of Kirk H. Schulz as the university's 13th president. The mace is a decorative symbol of office and is typically carried at the front of academic processions. Designed by Tom Boley, a 1970 university graduate, the mace is made from a purple wood called purpleheart and a light-colored maple.

Representatives from the member institutions of the Association of Public and Land-Grant Universities traditionally serve as delegates at Kansas State University presidential inaugurations.

At inauguration ceremonies, the president, president's cabinet, and other designees often wear academic regalia. The history of academic dress dates back to the medieval European universities of the 12th century. Universities in the United States have standardized academic dress so its features are common and uniform throughout the country. These features include:

At Kansas State University, gowns are black and typically made of synthetic material or worsted wool. The pattern varies with the degree held: open sleeves for the bachelor's degree; long, closed sleeves with slits for the hands for the master's degree; and round, bell sleeves for the doctoral degree.

Students receiving graduate degrees wear hoods. The master's hood is shorter than the doctoral hood and lacks the panels of the doctoral hood. Hoods are lined with the colors of the university; the university's lining is purple with two inverted chevrons. The binding or edging of the hood is the color pertaining to the subject of the degree.