The Pre-Law Advisory Council was established in the fall of 2015 by the Office of Pre-Law Advising to help students better understand the future of the legal profession, give advice on crafting new programs, identify supporters, and provide insight on how best to reach philanthropic goals.

The council is made up of ten members from different backgrounds, including attorneys, judges, law school deans, and philanthropists, all of whom are interested in supporting and strengthening the Pre-Law program at Kansas State University. Below are the names and biographies of the members of the Pre-Law Advisory Council who have generously donated their time and effort to help Pre-Law students succeed. 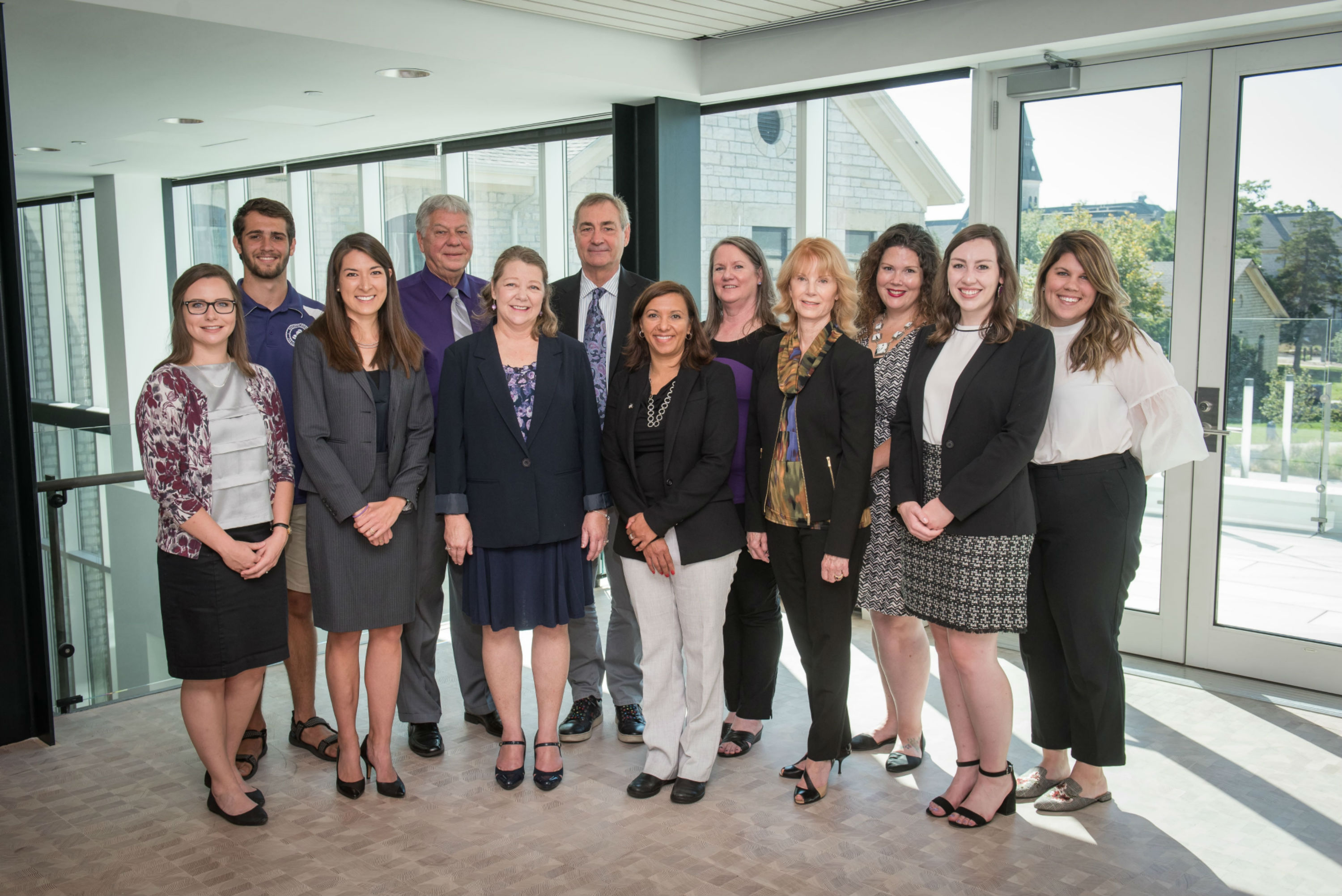 The Pre-Law Advisory Council met in Regnier Hall for their annual meeting. The Council discussed program facilitation, fundraising, and improvements for the Office of Pre-Law Advising.

The Council heard from a panel of current Kansas State Pre-Law Ambassadors, Olivia Haney (Senior, Chemistry, NRES), Miranda Moore (Senior, Communication Studies, Political Science), Jessica Johns (Senior, Philosophy, Political Science), and Nicholas Kaechele (Sophomore, Chemical Engineering, Political Science). The students spoke about the benefits and opportunities they have received through the Pre-Law program and discussed areas of need and growth for the program including, law school preparation classes, experiential learning opportunities, internship opportunities, and financial assistance through the application process. The students had the opportunity to talk directly with members of the Advisory Council during breakout sessions.

Amy Bipes is a legal assistance attorney with the Office of Staff Judge Advocate at Fort Riley, KS. She graduated Summa Cum Laude from Kansas State University with a Bachelor’s Degree in Elementary Education. She earned the degree of Juris Doctor from Washburn University School of Law in 1998. After completing law school, Ms. Bipes began working in private practice in Topeka and later served Shawnee County as an Assistant District Attorney from 2005 to 2009. She has been assisting soldiers, veterans, and their dependents with legal issues for six years. She currently lives in Manhattan with her husband and teaches Introduction to Trial Advocacy at K-State. She is also a frequent speaker in the freshman CAT class, Law and Society.

Born in Leavenworth, KS, The Honorable Henry W. Green, Jr. received his undergraduate degree from Kansas State University with dual majors in History and Political Science. In 1975, he graduated from the University Of Kansas School Of Law and engaged in the general practice of law for nearly two decades, including a part-time instructorship at the National College of Business. In 1993, he was appointed to the Kansas Court of Appeals where he has served for 25 years. Judge Green is an active member in the local, state, and American bar associations, in addition to serving as pro bono counsel for the Buffalo Soldier Monument Committee, which raised over a million dollars for the Buffalo Statue Monument honoring the first All-Black Cavalry. Judge Green has come to campus many times to speak to and engage with Pre-Law students.

Audrey Mross, Kansas State University alumna, is currently a partner at Munck Wilson Mandala and head of the firm’s Labor and Employment Section. She received her Bachelor of Science Degree in Marketing from K-State in 1980, and went on to receive her Juris Doctorate from Southern Methodist University School of Law in Dallas, TX. Her articles have been published and quoted in USA Today, CNN/Money, and the Wall Street Journal, among others. She is a member of local, state, and the American Bar Association as well as, the K-State Alumni Association, American Heart Association, the Society for Human Resource Management, and several other renowned organizations. Audrey is the creator, manager, and driving force of our ‘Cat Counselors listserv and is a mentor to both Pre-Law and Business Students.

Scott Smalley received his undergraduate degree at Kansas State University and attained his Juris Doctorate from the University of Kansas School of Law. He is currently a partner in the Banking and Financial Services Division of the Kansas City law firm Stinson, Leonard, Street, LLP. Mr. Smalley’s representative experience includes finance transactions, mergers and acquisitions, bank regulation, and general corporate representation. Mr. Smalley is actively involved in his local, state, and American bar associations, the Missouri and Kansas Bankers Associations, United Way Young Leaders and the Leukemia and Lymphoma Society. In 2009, Mr. Smalley was named the Leukemia and Lymphoma Society’s Man of the year for raising more than $30,000 in support of the organization’s 2009 campaign. Mr. Smalley has frequently provided guidance and advice to K-State Pre-Law students as they navigate decisions on law schools and careers.

Judge Meryl D. Wilson graduated from Kansas State University in 1971 with a Bachelor’s Degree in the Science of History. He received his law degree from Washburn University in 1974, and attended the National Judicial College in 1997. He was sworn in as a District Court Judge for the 21st Judicial District on April 18, 1997. Judge Wilson continues to be an active member of his community, participating in the Manhattan Chamber of Commerce and the Fairmont Park Board, as well as serving on the USD 383 School Board for eight years. Judge Wilson has taught Business Law here at K-State since 1983. He has opened his courtroom to the Pre-Law Program, allowing students to observe court proceedings and talking with them about law and the legal profession.

Carla Pratt became dean at Washburn University School of Law in 2018. Prior to joining Washburn Law, Dean Pratt served as Associate Dean for Diversity and Inclusion at Penn State's Dickinson School of Law where she was the Nancy J. LaMont Faculty Scholar and Professor of Law. Dean Pratt has taught courses in Constitutional Law, Federal Indian Law, Education Law, and Race and American Law. While at Penn State Dickinson Law, Dean Pratt received the law school's Philip J. McConnaughay award for outstanding achievement in diversity related work. From 2012 to 2018, Dean Pratt also served as an Associate Justice for the Supreme Court of the Standing Rock Sioux Tribe in Fort Yates, North Dakota. In this capacity she heard appeals involving tribal members and those doing business with tribal members in cases relating primarily to tribal criminal law, family law, business law, and constitutional law.

Stephen Mazza graduated from the University of Alabama School of Law with honors and received his LLM from New York University School of Law, where he was managing editor of the Tax Law Review. He joined the KU Law faculty in 1998 and was named dean in April of 2011. Dean Mazza has expanded the number of tax offerings at KU, teaching courses in Taxation of Mergers and Acquisitions, Tax Procedure, and Tax Policy. He is an active member of the taxation section of the Kansas Bar Association and a frequent speaker on tax issues.