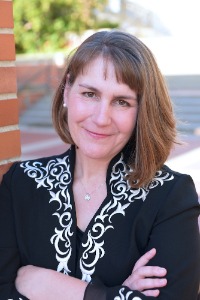 Rachel Dirks, Director of Orchestral Studies, is an active conductor, clinician, and educator. In addition to her work with the KSU Symphony Orchestra, she teaches applied cello and string education at K-State. Dr. Dirks holds cello performance degrees from the University of Texas at Austin and Bethel College, and a Ph.D. in music education, with an emphasis in orchestral conducting, from the University of Kansas.  As a guest conductor Dr. Dirks has been invited to conduct orchestras throughout the United States, including recent appearances in Kentucky, Oregon, New York, Illinois, Missouri, Oklahoma, and throughout Kansas.    As a featured clinician, she has presented at the National Convention of the American String Teachers Association (ASTA), the Midwest International Band and Orchestra Clinic, and the state music education conferences of Texas, Oregon, Colorado, and Kansas. Her most recent research has been accepted for presentations at the International Society of Music Education (ISME) and the National Association for Music Education (NAfME).

Along with her work at Kansas State, Dr. Dirks serves on the national ASTA committee on health and wellness with a focus on mental health. Her writing has been published in the American String Teacher, the Kansas Music Review, and several volumes of the instructional publication, Teaching Music Through Performance in Orchestra. She has led performance tours to Italy, Austria, Ireland, San Francisco, Chicago, and New York, and as a cellist, she has enjoyed performing in a wide array of ensembles and venues, including Carnegie Hall.  And, as an educator, she has been honored with awards from the Kansas Music Educators Association, the American String Teachers Association Kansas Chapter, the Lawrence Schools Foundation, and the Newton Public Schools.  Throughout her work, her fundamental goal is to encourage musicians to seek and create community through music.

Versatile violinist Madeleine Jansen enjoys a multi-faceted career as a performer, arts advocate, and educator, and has been praised by the San Francisco Classical Voice for her interpretation of composers from Dvořák to Brubeck. As the newly appointed Instructor of Violin and Viola, Jansen teaches violin, viola, chamber music, and string pedagogy at K-State.

As a soloist with orchestra, Jansen has performed in Carnegie Hall, the United Nations Headquarters (NYC), Capitol Hill’s performance hall, St. Peters Church (NYC) and Flushing Town Hall (NYC). Her solo and chamber music recital appearances have taken her around North America and Europe, and she has collaborated with many of today’s leading concert artists. Recent performance highlights include performing Ralph Vaughn Williams’ The Lark Ascending with orchestra in Baltimore, a solo recital at the Arts Club of Washington, and a world premiere of an unaccompanied work for violin which she commissioned from Kurdish-Canadian composer Rizgar Ismael. As an arts leader, Jansen co-founded Arco in 2021, an un-conducted orchestra project dedicated to forging creative connections with audiences through meaningful community engagement.

Jansen is a passionate teacher who is committed to mentoring the next generation of musicians, and her students have earned acceptance to the Manhattan School of Music and Juilliard pre-college divisions as well as the violin performance programs at San Francisco Conservatory, University of Michigan, Boston University, NYU, University of Maryland, Vanderbilt University, and others. Jansen’s students have won numerous competitions and awards and have participated in festivals including Green Mountain Chamber Music Festival, the Round Top Festival Institute, and the NYU Summer Strings Intensive, to name a few.

Jansen studied at Boston University, Royal College of Music (London), and UMass Amherst, and is currently a doctoral candidate at the University of Maryland.

Russell Clark, Graduate Teaching Assistant, is currently working towards his M.M.E. with an emphasis in orchestral conducting. He holds a B.M.E. from the University of Kansas, and his area of specialty is string pedagogy in both the classical and jazz settings. Prior to attending K-State, Russell worked as the Assistant Director of High School Orchestras in the Lawrence public school district from 2017-2022. During his time there he was named the NEKMEA Outstanding Young Music Educator for Orchestra in 2019-2020. He has also been a director of the Lawrence Youth Symphony for the past six years. Russell continues to stay active in the musical community at large by maintaining a small studio of private students on violin and bass, working Summer Camps including the K-State String Leadership Institute, and playing in community ensembles such as the Lawrence Community Orchestra and the Topeka Jazz Workshop Big Band.