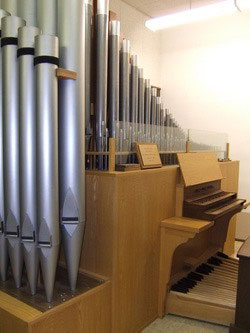 This organ, known as Holtkamp’s Martini model, originally built for Morningside College in Sioux City, Iowa, was a gift from Dr. Edward H. Sibley and his wife. Through the generosity of his son and his wife Ed and June Sibley, this delightful organ was donated to Kansas State University and was relocated to 102A McCain Auditorium in February 2013 by Quimby Pipe Organs, Inc., the curator of the organs at Kansas State University.

The concept of the Holtkamp Martini practice organ was first discussed when Oberlin Conservatory faculty members Grigg Fountain, Arthur Poister, and Fenner Douglass met with organbuilder Walter Holtkamp at the old Oberlin Inn in the fall of 1948. Fountain related: “We adjourned to a new apartment in which Fenner and I had rented together—both being still single—and had Martinis and put down every possibility we could think of for cross duplication and unification to get the most for the least within what we then considered prime musical considerations . . . the resulting organ was that first Martini . . . It was delivered early in the Spring of 1949.”

John Ferguson notes, “The organ design, name the Martini in honor of the cocktail that attended its conception, has proved to be remarkably durable. Over thirty of essentially the same design were in use in schools and a few churches across the country at the time of Holtkamp’s death in 1962.”