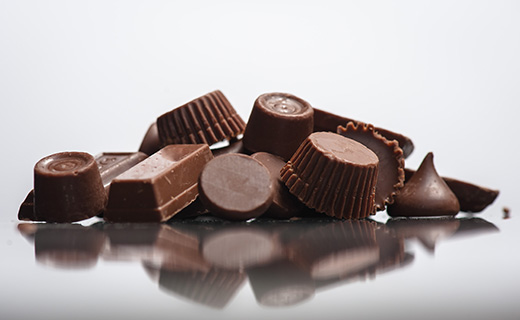 A Kansas State University study found that while millennials may voice support for ethical chocolate, it's not what they choose.| Download this photo.

MANHATTAN — The majority of millennials may not be putting their money where their mouths are when selecting chocolate, according to a Kansas State University expert in psychological sciences.

Despite strong preferences for ethical chocolate in focus groups, only 14 percent of millennials in individual choice studies selected candy with ethical or social factors labeling — such as organic, Rainforest Alliance Certified, non-GMO and Fair Trade — according to a study by Michael Young, professor and head of the university's psychological sciences department.

"For most participants, their choice behavior reflected minimal concern for ethical factors, whereas their public declarations in a focus group suggested otherwise," Young said. "Participants who modestly preferred a candy with certain labels in our focus group may be unwilling to pay much more to obtain it."

"We got the impression in the focus groups that millennials were learning in college what attitudes were popular to express regarding their food," Young said. "But many of the older millennials confessed that they often were not making purchases consistent with those expressed attitudes due to limited financial resources."

Five of the six clusters, or 89 percent of the participants, favored clean labels, which Young defines as a smaller number of ingredients with pronounceable names. According to Young, two large chocolate companies announced changes to their labels in February 2015 in support of this preference. The one cluster that did not show preference for clean labels was the pro-taste and anti-organic cluster, which also preferred higher fat and had a distinctive dislike for organic and non-GMO products.

"I'm still trying to wrap my mind around what is really going on in the heads of the individuals in the pro-taste and anti-organic cluster," Young said. "They were mostly men with high self-control — individuals who don't impulse buy — and all they really cared about was the taste."

Participants in the choice study also filled out a survey about buying history of average food items, which Young and McCoy used to establish buying demographics and confirm the clusters. For example, they found that participants in the calorie and health conscious cluster reported that they did not typically buy things like chocolate milk or cake mixes.

"The buying demographics validated the emerging picture of the clusters," Young said. "What they were doing in the context of the experiment really did correlate with what they were self-reporting as products that they were buying in the real world."

The majority of the participants were from the Midwest, which Young said may influence the choices.

"Although older millennials voice their interest in certified ethical chocolate, it is too early to tell if this is a fad or a shift in consumer preferences," Young said. "However, ethical sourcing is a laudable goal and companies should lay the groundwork for possible change in consumer preference."

The psychological sciences department is in the university's College of Arts & Sciences.

Despite strong preferences for ethical chocolate in focus groups, only 14 percent of millennials in individual choice studies selected candy with ethical or social factors labeling, according to a Kansas State University study. In addition, a majority of millennials also prefer chocolate with clean labeling.

"For most participants, their choice behavior reflected minimal concern for ethical factors whereas their public declarations in a focus group suggested otherwise."

— Michael Young, professor and head of the psychological sciences department