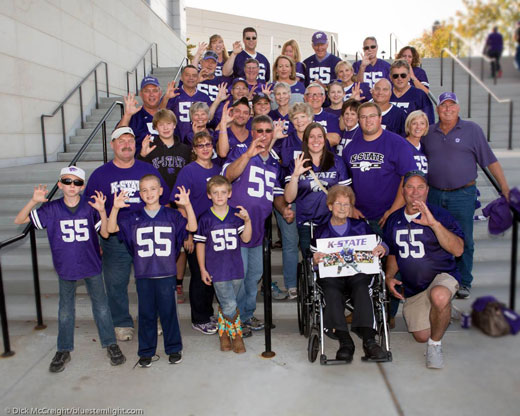 MANHATTAN — Kansas State University's Family Day will look different this year, but that's not stopping the 2020 Family of the Year from being honored for their Wildcat pride.

The Whitehair family has been selected as the Family of the Year by Chimes, the junior honorary, which sponsors the annual competition. The family will be honored during Virtual Family Day Saturday, Sept. 12, via the Chimes Facebook Page and website, and the K-State Parents and Family Program social media pages.

"The members of Chimes select the Family of the Year based on their affiliation with K-State, what family means to them, and their demonstration of K-State pride," said Jayden Hanna, Chimes' co-director of events. "The Whitehair family, though large in number, is a close-knit family that represents what it means to be Wildcats through their support for each other and the university. After visiting with them via Zoom, it is clear to see they embody K-State values and demonstrate what it truly means to be a part of the K-State family."

According to the family's nomination application, Whitehair extended family members are descendants of John and Mary Neyer Whitehair, who settled in Dickinson County, Kansas, in 1875 and started their family when Kansas State University was a fledgling land-grant institution. Family members span four generations of K-State current students, alumni, former students, contributors to the KSU Foundation and Ahearn Fund, and Wildcat fans. More than 75 family members have earned bachelor's degrees from the university, 18 have earned master's degrees, four are Doctors of Veterinary Medicine graduates and one earned his Doctor of Philosophy.

"Members of the extended Whitehair family continue to take pride in their university roots," Janet Whitehair Cooper, Manhattan, said in her nomination application. "They are community leaders in many parts of the United States, giving credit to K-State for developing their characters and preparing them for the work world — and they continue to give back to the university."

The Whitehairs have been distinguishing themselves on and off the gridiron, thanks to their K-State degrees.

Cody Whitehair '14, who was the Wildcats' team captain and All-Big 12 player, is in his fifth year in the NFL with the Chicago Bears. While on the K-State football team, 130 relatives and friends proudly wore "WHITEHAIR 55" jerseys on game days, which was organized by Cody's dad, Kevin Whitehair '89, Abilene.

Another offensive tackle for the K-State football team was Norman Whitehair '43 '52, a first-generation Whitehair K-Stater. He served on the K-State faculty for 35 years and was head of the agricultural economics department for 15 years.

Other noted Whitehairs include Christine Lorson Downey Schmidt, Inman, who served in the Kansas Legislature and on the Kansas Board of Regents. She was on the K-State Presidential Search Committee that selected Kirk Schulz as the university's 13th president.

The Hintz family siblings — Greg '74, Loudon, Tennessee; Maureen Hintz Burson '75 '83, Lincoln, Nebraska; Jim '78, Andale; Alan '80, Lenexa; and Jean Hintz Artz '83, Wichita — have invested through the KSU Foundation in the future of K-State by establishing the Bernie and Bill Hintz Family Scholarship in memory of their parents.

Several family members have chosen careers associated with K-State, working as extension agents, a professor and department head, a graduate class instructor, a librarian, an office specialist, a nurse, an assistant director of Lafene Health Center, and worker at the Swine Teaching and Research Center. Several also worked in campus labs during their undergraduate years.