At a ceremony on Saturday, Oct. 29, the Royal Purple yearbook was named the Number One college media publication, having won more national Pacemaker and Pacemaker Finalist awards than any yearbook, newspaper or magazine combined over 100 years. The Pacemaker is considered the Pulitzer Prize of college journalism.

The Associated Collegiate Press made the announcement after recognizing the Top 100 Pacemaker winners of all time which included both the Royal Purple and the Collegian newspaper. 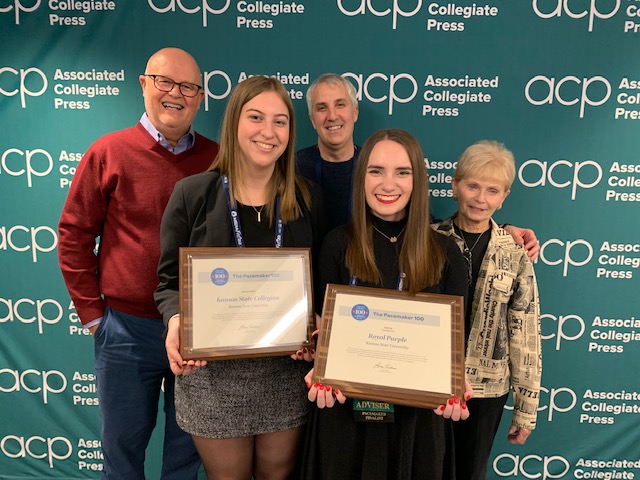 “This is an astounding accomplishment,” Director of the Collegian Media Group, Ira David Levy, said.

The Royal Purple’s adviser, Hallie Everett, said, “The award reminds us of the RP’s long history of being an award winning publication with staffs and advisers who made it great long before us."

Past advisers include C.J. (Chief) Medlin, Dave Adams, Kelly Furnas, Kelly Glasscock, Spencer O’Daniel and John Walter. Retired CMG Director and Royal Purple adviser, Linda Puntney, said all the advisers “are exceptional, especially Medlin and Adams because they and their staffs built the foundation and created the tradition surrounding the RP today.”

“I couldn’t agree more,” Levy said. “I used to look-up to CMG publications when I started advising student media at Wright College, in Chicago, and attending national conferences in 1995. It’s a real honor to be at the helm now, helping to carry the legacy forward.”

Director of the Associated Collegiate Press, Laura Widmer, said when all the tabulations were done, “It wasn’t even close.”

Levy said, “The milestone and the plaque are very nice, but it’s the years - a hundred of them - of the students’ hard work, that have made it possible. We owe a great deal of gratitude to those who have been documenting K-State’s history for more than a century.”

Levy added that if anybody knows K-Staters who have been part of CMG’s legacy and graduated at least 10 years ago, you can nominate them to be inducted into the Collegian Media Group’s Hall of Fame. Visit our website at https://www.collegianmedia.com/hall-of-fame/.

Collegian Media Group publishes the Collegian newspaper, Royal Purple yearbook and Manhappenin’ magazine. Students across all academic disciplines work on the publications to build portfolios and skill sets they can use in any workplace environment. They gain teamwork, communication, and leadership skills. CMG operates in Kedzie Hall, Room 103. Students can visit the office anytime to learn how to get involved. The organization operates as a 501(c)3 under IRS rules. Most of CMG’s revenue derives from student activity fees, advertising sales, yearbook sales, tuition from a summer workshop for high schools in Kansas, and other endeavors.