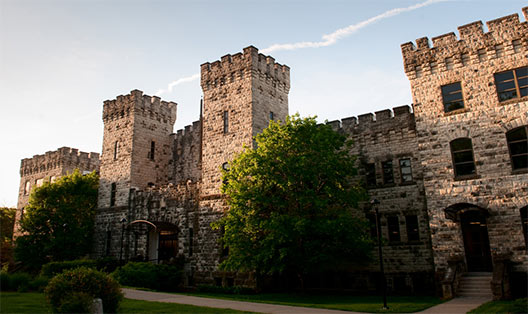 Nichols Hall dates from 1911, when it housed the physical education and military science departments. It was originally built to resemble a castle, as was the tradition in that era for buildings used by ROTC programs. The building also housed a swimming pool in the basement, a radio broadcasting studio on the top floor and some space for the Department of Music.

Following a massive fire that gutted the interior in 1968, the state legislature allocated $5.5 million to rebuild Nichols Hall in response to pressure from K-State students and supporters. The new structure, completed in 1985, was named for Dr. Ernest R. Nichols, former head of the Department of Physics and former K-State president in the early 20th century.

The Nichols fire devastated the Department of Music when all sheet music burned except the Wabash Cannonball. Thus, that song was the pep band's only option at a basketball game three days after the fire, and it became a popular school song from then on.