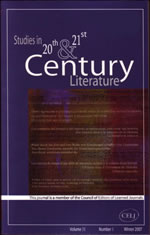 STTCL is committed to publishing high quality, anonymously peer reviewed articles written in English on post-1900 literature, film, and media in French, German, and Spanish. The journal is devoted to theory and criticism in the modern languages, and encourages interdisciplinary and collaborative submissions. A book review section appears in every issue.

Many acclaimed literary critics and theoreticians have appeared in STTCL and served as guest editors of STTCL special issues dedicated to one language or theme. Likewise, the editorial advisory council includes esteemed authors, critics, and theoreticians in French, German, Spanish, and Comparative Literature. From 1976 to 2003, the journal was known as Studies in 20th Century Literature, and through 2013, it appeared in print form, twice a year (winter and summer) with articles written in English on literature in French, German, Russian and Spanish.

The journal began as a project of Kansas State University faculty in Modern Languages who made personal donations and shared responsibilities associated with mailing and handling in order to maintain the viability of the journal during the most critical time of its development.